With See You at Peelers, Disclosure is Not that Difficult 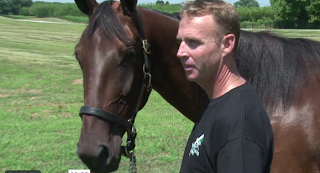 Early in the year, the talk of disclosure when it comes to the health of a horse was a hot topic, mainly because of the Uncle Mo situation. On twitter, via various blogs, and on chat boards, most fans thought that they deserved the right to know what was happening with their favorite horses. Adding to the chorus were some industry watchers who believed that transparency, especially in the social media age, is something we as an industry should embrace. On the flipside, many owners and trainers towed the company line that has permeated thoroughbred racing for a century or more; namely, it's my horse and it's none of your business.

For my part I have always believed transparency is a good thing for our sport, so I am biased in that regard. However, in copious discussions with my twitter friends and elsewhere, I brought up that harness racing does not shy away from disclosing information on our star horses virtually at any time. In harness, whether it is a potential (and probable) multi-million dollar stud like Big Jim (his ankle issues were disclosed, with almost a willingness to show the press the Xrays), or your average every day horse, not only does it happen, it is considered commonplace.

Adding her name to the list is See You At Peelers, the superstar mare.

As most know, she lost her first race ever at the Meadows a few weeks ago, in what many thought was a sub par effort. She simply had no fight after three panels, and stopped like she was shot. Undaunted, and figuring it was the trip or the pilot, her trainer decided to give her one more try. Against horses she is literally a dozen lengths better than, she was life and death to hold them off.

Today, we heard why via harnessracing.com, and there was no funny business:

"Takter said See You At Peelers has been displaying a higher-than-normal heart rate, and that concerns him.

“Her heart rate is high and she’s not urinating normal,” he said. “Her heart rate 12 minutes after a race is never over 90, and she was 129 at The Meadows, but I thought it was because she had a tough race. This time (after the NYSS) it was 118 and that’s not her.

“They’ve already confirmed her blood work has come back good, but they are doing a stress test on her on a treadmill,” he added. “Something isn’t quite right with her so hopefully they can pinpoint what’s bothering her. She’s just not the same horse.”

The above is how it should be done. The public has followed the mare, and they want to know how she is doing and that she's being treated well. It's not that hard to say what's going on with your horse, and if we want to be treated like a true sport, it should be expected of us all. Selfishly, it can be used as an opportunity to show our sports' detractors just how loved our horses are, too.

If you have a nice horse that the public knows and he had a surgery, or if his heart rate is wonky like Peelers' is, share it. The world won't end.


See You At Peelers photo op -- Jimmy Takter from USTA on Vimeo.
at September 06, 2011
Email ThisBlogThis!Share to TwitterShare to FacebookShare to Pinterest

Speaking of disclosure, I've always thought it was odd that there are no disclosure rules (that I know of!) for confirmation correcting surgeries at the foal auctions. Here's a video from the TTimes series "Ask a Vet" on one such type of surgery:

Don't people purchasing foals want to know about this sort of thing? And if not, I suppose it might shed some insight on the owner mindset that you mentioned.

And thanks for the Peelers update!