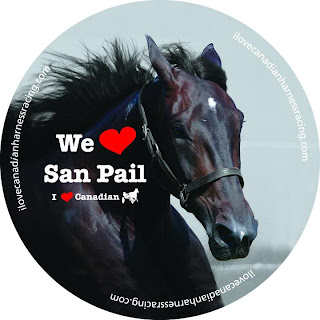 Admit it, in a world where we're talking about 99ers and one percenters, no matter where you fall on that spectrum, you love to cheer on blue collar horses, owned by blue collar folks. In the sport of horse racing, to find that horse you have to look no further than shoe-in Horse of the Year, San Pail.

Moved as a three year old to a mom and pop stable, the horse was an unraced gelding that "no one wanted". Years later as a seven year old, he has climbed the mountain to the top of the sport. He has raced 107 times, with 49 wins, and has amassed a bankroll of almost $3 million dollars. With each of those wins, the winners circles get bigger, the turnstiles spin a little more, and more and more people turn their televisions on.

Last evening at the Breeders' Crown, the San Pail Fan Club reached a crescendo. He would get his biggest test to date. He would not only have to race the top trotters on this continent, but from Europe too.

Landing on Friday, Commander Crowe and Rapide Lebel, the top horses from overseas were fit and ready to take on the blue collar horse, and they delivered (especially the latter) two performances that made everyone take notice just how good our European counterparts are. Hung from the quarter, even for a period three wide, and moving first over through stiff fractions, the excellent Rapide Lebel kept digging and digging, trying his heart out.

In the end the local horse, to cheers, won, but the invaders certainly had nothing to hang their heads about. 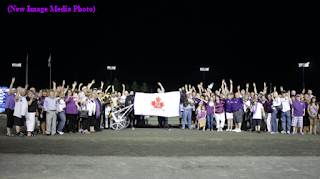 I remember speaking with an old time horseman once, and he said the days where when you got beat you  "shut up, shook the man's hand and congratulated him for having a fine horse" have been lost. Well, lost for some maybe , but not for all.

In the post race interviews (if you are interested please watch them below - they are at the 3:45 minute mark) the blue collar horse's connections showed no bravado, and they conducted themselves like they always have; with respect for their horse, his fans, and his competition.  They are truly happy to be blessed with this animal, and are incredibly appreciative of the fans who feel they are a part of their horse.

A very emotional Randy Waples: "I honestly think that if I had stayed where I was and the other horse had gotten to the front I don’t think I would have beat him. They both raced unbelievable, they are truly champion horses those two [European] horses. They are just unbelievable, it was a great experience to race against them. I’m glad that I beat them, but they didn’t lose any races tonight."

Trainer Rod Hughes: "It just shows what can happen when a horse like this sticks around and races. It's good for the sport"

This is the power of one horse, in one division. One only wonders what we could do in terms of viewership and participation via attendance if we had five or six.

Further to yesterday's post crown blog where I mentioned the international flavor adds to its excitment and marketability, Greg from the Harness edge tweeted this to me this morning:

It is a good illustration why I disagree vehemently with the argument the Breeders Cup and it's pitch as a world wide event has hurt racing, and that we should focus on our horses, and our dirt. Please enjoy the San Pail video below. Again, around 3:45 are the interviews.

at October 30, 2011
Email ThisBlogThis!Share to TwitterShare to FacebookShare to Pinterest

Was there and loved it. I was a first disappointed by the rather unimpressive attendance for such an event, but being in front of the San Pail fan club was a joy. They cheered so loudly for the horse down the stretch that I'm certain Waples must have heard them, despite the track being so far away from the fans. You could see by his drive that he was desperate not to allow anyone to get an edge on him. There is hope for harness racing yet!

All I can say is San Pail and this race shows this hype about racing 2 and 3yos is stupid. Here we should emulate the Europeans, you want to race for the big money, you race aged horses.