Here are some news and notes that caught my eye this weekend (so far!):

Short fields makes for some pretty awful racing, but when you are watching excellent horses do their thing it makes it a whole lot easier to watch. Yesterday at Belmont we got to see Uncle Mo look sound, happy and impressive in his win. Ditto Havre De Grace and Stacelita.

At the Red Mile last night we got to see similar. Although the purses for these events are not juiced, horsemen and horse owners made the drive to the storied track to race, and it was a great night to spectate. San Pail stamps himself (again) as the best trotter in the land with his victory. And what about Drop the Ball? She is quite simply (when on her game) freakish. In the Allerage for older pacers, two of the hardest hitting horses in all of racing were noses apart, with We Will See beating Foiled Again.

I thought the freshening of early year standout Arch Madness might do the trick, but no dice. He could not sprint with San Pail. In the fillies race Idyllic again showed just how hot she is when she has to be fired up early. She was a complete runaway.

I wish the Greater Sudbury Pace was on youtube. I do not think I have ever seen a horse go a tougher trip than Piece of the Rock. He was seconds better than the field, but with the 8 post and being four wide to the quarter and three wide to the half took its toll.

Eric P - commenter, Canadian bettors advocate and fan/bettor of both breeds - joins twitter. He's at Epo13.  With a name like that he should last longer than your average twitterite.

Today: The Kentucky Furity at the Red Mile.

Today: Balmoral has another carryover in its 15% pick 4. Get handicapping as the pool will again be huge. 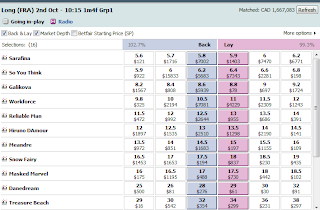 at October 02, 2011
Email ThisBlogThis!Share to TwitterShare to FacebookShare to Pinterest

I live in Sudbury, and never has so little been done by so many to promote a product. It is an embarassment. $15k handle for the 10 race card.