A Yearling Sale Unlike Many Others

I’ve been to dozens of yearling sales, but this one was certainly different.

On Friday evening I headed out to central Nova Scotia, on beautiful sideroads through places like Pugwash, Wallace and the Wentworth Valley. The destination was Truro, where there was a yearling sale.

“Breeders usually lose a few thousand a horse, and owners are lucky to not lose about the same”

I read that earlier about this, and other sales out this way.

The purses are simply not there, the bet is not there either. We’re not talking Ontario, Pennsylvania or Indiana, where slots drive purses (and yearling prices) into the stratosphere. 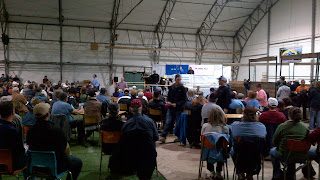 Anyone who has been to Harrisburg or Lexington for a sale sees the who’s who of harness racing. $300k colts with Jerry Silva or Jeff Snyder’s name on them are commonplace.  Syndicates are formed, planning is intense. If someone hits the jackpot it could mean millions.

As I walked into this venue I quickly learned it is not that kind of sale. What I saw was refreshing. There were no deals being made, no $80k cars in the lot. There was no electronic sales board. There were no clearance forms or credit items just in case you stiff someone ("Oh no honey, if you have a check that's just fine", the lady told me). There were a bunch of folks, who seemed to know each other. There was hot dogs, and $3 beer.  The shedrow was tight, mucky and a little dim. And there were horses – only 44 of them - some from sires I have personally never heard of.

After moving the tack from Toronto to the east coast (on a part time basis) I decided I wanted to support the local harness community and have some fun in the summers by buying a yearling. This sale exemplified exactly why I made the decision:  There is zero pressure to pay stakes payments for the Metro or the Jug. There is little pressure to meet $4000/month training bills. There is little pressure on anything.  There is a bunch of people wanting to partake in harness racing, because they like harness racing.

I glanced at several in the book and I liked five or six of them. Brandon’s Cowboy as a sire made some sense to me, because I liked the horse, and he is the top sire out here from only a couple of crops. He has some chops. In addition there was a Four Starzz Shark selling. I bet him about 50 times and liked him as well; he has produced some nice horses from only a couple of crops. The rest I had no idea about, to be quite honest.

It was time to go see the colts and fillies up close just like you’d do in Lexington. Not really knowing a fetlock from a padlock I trusted a trainer named Ross to have a look-see at them walking, and shuffling around. There were a few that stood out: A couple of Brandon’s Cowboy fillies and a colt, and a filly by Fourstarzz Shark.  I particularly liked  the Four Starzz filly because I saw her stumble and not lose her feet, and she looked at me and winked.  That’s usually not a good sign for my pocketbook.

The bidding at the sale, was again, nothing like I am used to. It started sometimes at $500, and moved in $100 increments a great deal of the time. The average price usually ended up around $2000 or $3000, and it took a while to get there!

That damn Brandon’s Cowboy filly looked so good in the pre-walk, she looked at me, and was so well mannered. She was not at the top of the list and my trainer friend was getting a beer. But I bid to $5200. I had to stop since I didn’t want to spring it as a post-beer surprise to the trainer.  She was hammered down for 6k.

The Four Starzz filly was my first purchase as a local. The bidding was less than I thought. I bet the lack of a maternal line scared some folks off, but I thought she had a chance, and was worth it. Not long after this, "Inside the Pylons" on twitter said her mom brought $50k as a yearling at Lexington awhile back. That can't be a bad thing.

A half dozen hip numbers later, what I thought may be the sale topper was heading to the ring.

“Let’s take a look” I said, and my cohorts agreed.

I figured the handsome little colt with a nice new potential cross might bring 8 or 9, but the bidding stalled and he was purchased. Not really planning on it, I was the last person with the hand up, and my one yearling excursion was now two.

I spent a few bucks, and I had a great time.

“Breeders usually lose a few thousand a horse, and owners are lucky to not lose about the same”

Why do people keep doing it? I don’t know, but this morning I don’t have a regret in the world.

Notes: I missed the first night of elims for the BC so I have some replay watching to do. I should have some notes up this weekend if you want to chat about them. As usual, free programs are up.

at October 22, 2011
Email ThisBlogThis!Share to TwitterShare to FacebookShare to Pinterest