Some disruptions can be planned for, and business model's modified to attack the changes, and those have occurred as well. If one told you thirty years ago that state after state and province after province will have billion dollar casino's, slot parlors, sports betting, lotteries and everything that goes with them, you might think Vegas would be a ghost town, but it is not. They modified what they were.

I read a pile of white papers each week, and one that I did read was the Ontario Lottery and Gaming Review. I figured that if they were coming for all of racing's slot money in Ontario I might as well understand why the consultants they hired told them to do it. In effect, many of the changes they have planned were the result of being disrupted, and this was their response to them.
I personally think many of the changes they have planned will not work - mainly because the citizenry in the province does not have the stomach for more gaming. However, the plan was in response to something real - a changing gaming world - and they are trying to make it happen.

In racing we too have faced many disruptions, just like the OLG has. Online gaming, is one. That realm is younger, tech savvy and if they wanted their gambling fix in 1980 they went to the track. Now they go online to play a game of poker, or what have you.

Racing's response to that has been somewhat muted.

For example, Betfair has been running its business since 2002 - 11 years now - with this demographic (green bars show a higher weighting to the general population, red shows lower): 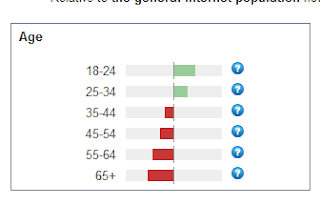 Meanwhile, racing toils with this (DRF.com): 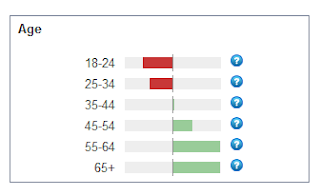 The former Managing Director of Betfair was interviewed a long while ago now and said this about their customers:
We complain that racing does not have a sales funnel to young people, but what have we done?

What about giving them what they want - a new exciting way to play the sport. That was never really considered. In fact, alphabet after alphabet tried to block any change, and continue to. This has been going on for eleven years.

I have been critical of the OLG plan here on the blog and I am the first to admit I am totally biased, because they side-swiped my sport. But as their white paper shows, they have seen the writing on the wall and they realize they need to make changes to ensure the Province receives revenue from gambling for decades to come. They are making that happen, come hell or high water, no matter how many toes they step on. They're getting punched, but they are trying to punch back.

Racing too has been given a chance, a chance to change the sport, the way it operates, the way it distributes the product, through betting exchanges and other avenues.We don't roll with the punches and change, we seem to simply take punches.

If we try and block product changes that a demographic says they like and are interested in, how can we ever expect to win them as customers?

Betfair is over a decade old now so it is not longer "new", but when the next Betfair comes along that might help racing, I hope it says yes and looks at it. We can no longer look to block, protect, and hope things get better.


at April 10, 2013
Email ThisBlogThis!Share to TwitterShare to FacebookShare to Pinterest