Desert Horse Shows Are Tough, A Track Trying & The Ratings

By now you've all read the Baconator (and others) story on So Cal racing. I feel there is little to comment on, as it is pretty new, and somewhat nebulous.

However, one comment in the (massive) comments section caught my eye:
Those goofy backstretch names (and rumors). I have never heard of it, so like a certain trainers connections, I googled it. I only found a mention of it on a Arizona Desert Show horse thingamajig.
So it appears "Mexican Red Bull" does exist (whatever it is).

Regardless, this show is tough because in one of the following paragraphs, they ain't taking no guff:
Holy moly. Watch out.

HANA's 67 Racetracks are now published, with full sortable notes on field size, handle growth, pool size and many others.

Hastings opens this weekend and Raj and the fella's and ladies are sure trying hard. They have lowered takeout yet again, and are doing the little things (wifi, a good customer experience etc) that go hand in hand.

Give these guys a look. 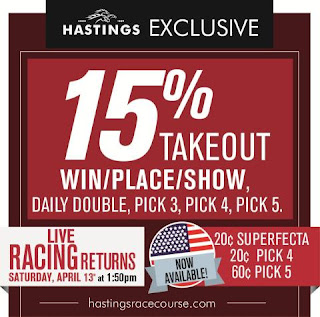 Oh oh, Crunk has been blocked by Baffert:

Yesterday I wrote about how the OLG's "plan" is a response to  changing demos and a changing gambling world. I also wrote how "weird" some of its implementation is. At least the Auditor General is now looking into it, although it probably won't mean much for racing.

Enjoy your Thursday everyone!


at April 11, 2013
Email ThisBlogThis!Share to TwitterShare to FacebookShare to Pinterest