What's Up With the Chalk, And Saturday Notes

The dog got me up early this morning, the poor fella isn't doing the best, but I see I was not the only one. There are works happening at Churchill and there's a buzz. Seven days to the Derby.

We were chatting on twitter yesterday, having a little fun with the fact that five or six of the first races run were won by the favorite. For players who fade the fave as much as possible (e.g. me) it makes for pretty paltry scoring, in the game of money we all play.

Going through my 2013 database, we see something that is somewhat unfamiliar. A plethora of chalk. 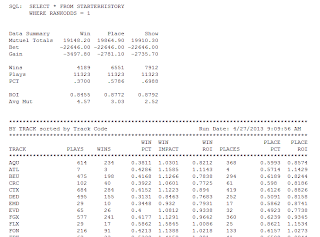 This is pretty astounding.

It's rare to see a 0.8455 ROI for chalk, but the place and show pool ROI's for the favorite is something I can't ever remember seeing at this stage of the year.

I have heard anecdotally (since last year) that computer players have been playing shorter prices because shorter prices are coming in more often, and with a rebate and a filter or two, it can be profitable. There is something happening out there, I think.

For whatever reason, we're seeing chalk pay more than in previous sets of data.

This is not good for racing. A race office's task is surely to get horsemen to enter, but they have a responsibility to the customer to ensure good betting affairs are set up as well. Without good betting affairs you cannot attract handle and the game becomes a coin flip, at 22% rakes. In other words, a mugs game, and mugs game's can't prosper.

Here are the chalk, and ROI's by track so far if you are interested. 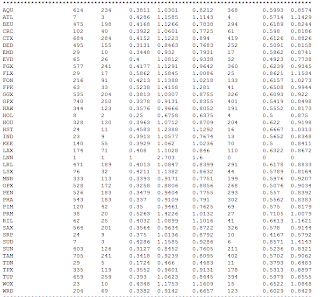 Today we'll likely find the works steam horse of 2013. Thus far it has been Revolutionary. With a sparkling work, along with Calvin, is there a chance he could actually be the favorite? I don't think so, but anything is possible.

Rosie Napravnik is on 60 Minutes this weekend. Mylute should take some serious money, and for many he'll have to be a pitch in the win pools because of that.

I read a few tweets yesterday about having the winner being the most important thing in a Derby - it's one race, find a horse you like and play it, regardless of the odds. That's a point, but as a gambler you never look at a bet as a one-off. I don't care if you are betting elections every four years, or a Derby every one year. They are all a bet in a sea of bets, and you always, no matter what, want to bet what you think is a value (i.e. positive expectation bet).

The 2013 OSS sked was announced. I had to chuckle, there are "Mid Season Championships" for the two year olds in the first week of August. A lot of us don't like to even have the two year olds qualified by then.

Bacon has been hitting the business hard of late, trying to keep everyone honest. He'll take some flack for it, but there are very few (virtually none) who will take on these issues in horse racing. Fortunately there are enough advertisers who agree with many of the editorial stances and story topics where this should not be a monetary issue. It's not 1990 anymore.

at April 27, 2013
Email ThisBlogThis!Share to TwitterShare to FacebookShare to Pinterest

Count me among those being seduced by Revolutionary. He seems to hit most of the right notes. The knock I have against him is he showed no early foot at all in the final prep. That is rarely a winning profile. I was prepared to not like Orb, but it's hard to find a hole in him. He hasn't run particularly fast, but you get the feeling there's a jump to be made. The price I'm starting to gravitate to is Palace Malice. We may be in the century of the lightly raced Derby winner, but I still have to believe the right kind of seasoning along with a positive arc is the best way to go. He has that along with Derby breeding. Despite the four preps I think he's still a horse with tremendous near-term upside. The two horses I think will run well but can't win are Goldencents and Java's War.

he price I'm starting to gravitate to is Palace Malice. We may be in the century of the lightly raced Derby winner, but I still have to believe the right kind of seasoning along with a positive arc is the best way to go. He has that along with Derby breeding. Despite the four preps I think he's still a horse with tremendous near-term upside. The two horses I think will run well but can't win are Goldencents and Java's War.presentations