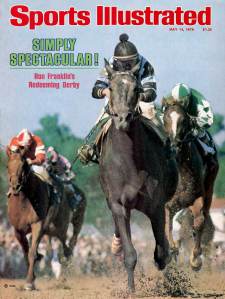 I read Paulick's piece this morning about when the racing bug bit him. I remember reading a survey somewhere (it might have been a HANA survey question a couple of years ago) about 'when you got interested in racing'. Most of the answers were 'my dad took me to the track'. For me, and it seems Paulick, it was different.

I remember visiting my brother who was in University - first of my family of miners and tailors to go - when I was a lad. He subscribed to Sports Illustrated and there was a story on Spectacular Bid going for the Triple Crown. I was fascinated. This horse looked like a fast one, and although I knew nothing about racing, I was going to watch this Belmont Stakes thingamajig.

To my horror, this Spectacular horse spectacularly flamed out. I made a proclamation as young kids do which was unassailable, "boy, he's not very good", and I felt duped by this SI article.

I didn't follow his career thereafter (I lived in the sticks and I probably couldn't if I tried) and when people would talk about the Bid a few years later, I would still say "overrated".


Years later, after reading and studying some of the greats I learned that the Bid suffered from an injury before the Belmont and did get a suspect ride, too. At maybe 70%, he ran a great race; I just didn't know it. He went 9 for 9 as a four year old and the rest is history - he was one of the top dirt horses ever.

I think back to the Bid each time a horse loses one or two races, who gets summarily criticized. It helped shape the way I think about our equine athletes.

Case in point, I did not want Rachel Alexandra to race Zenyatta in the Personal Ensign at 10f like everyone wanted. Rachel was a shadow of her best self and would've been trounced by Queen Z. Someone out there would've watched the race (many people would've) and concluded that Rachel wasn't "really that good, and could not hold Z's bridle". What she did before would've been trumped to many. She'd be my Spectacular Bid to some, if not a lot of casual fans.

There were many people who wanted to see Zenyatta fail miserably in the Classic at Churchill too, so they could call her a "slow synthetic specialist" and confirm their bias. I, conversely, was cheering like hell for her. I am so glad she got an okay pace set up, or didn't step on a nail before the race like Bid did, because could you imagine her legacy if she "had a bad day". It would've been worse than unfair; it would've been tragic for her and her connections.

I have a feeling I will be cheering for Orb this weekend. I think he's got the tools to be a pretty decent horse, and I hope he bounces back.

For all the casual race fans that watched him flame out in the Preakness, don't judge him like I did Spectacular Bid. He might not be as bad as you think.


at June 07, 2013
Email ThisBlogThis!Share to TwitterShare to FacebookShare to Pinterest