Blood Passports and Testing: The Sport Should Rally Around Jeff Gural 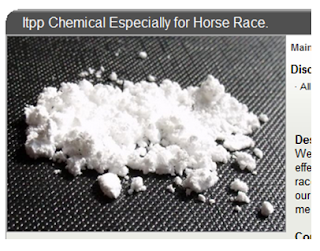 I was surfing the web last week and came across an ad on Equine Now for the drug ITPP. The rather creepy looking drug that is long-banned was brazenly being advertised for all to see. As if a picture and description wasn’t enough, this “reputable” business also lets you know in the ad that they sell “party powders, bath salts, and pills”.

Wonderful. Not only do we have to look for their products on backstretches, but in America’s neighborhoods, too.

We’ve read stories the past few weeks here in Harness Racing Update and elsewhere about Jeff Gural’s new initiative with a hired investigator, and the problems some have with it. I agree with some of the criticisms, but I must say after reading that ITPP ad it got me to thinking: This is what Jeff Gural is up against. I think his plan to add a deterrent, any deterrent, whether it be out of competition testing, investigators, barn searches or good old fashioned police work can help. Or at the very least it certainly can’t hurt.

Cycling has played a cat and mouse game with drugs like this for many years.  They tested, and tested, and interviewed and interviewed. Cyclists were mum and the tests were always one step behind.  In addition, there was no way to test for a blood transfusion, causing even more consternation for the sport. Modern cycling, as the Lance Armstrong affair pointed out, was pure poison.

Over the last several years cycling began to tackle the problems differently. Yes, they developed an EPO test, not unlike the one used in racing, but they also added a biological passport.

According to Sportsscientists.com, the biological passport concept “is that regular measurements of certain blood variables, like the percentage of reticulocytes, hemoglobin, and a calculated score called the Off-score, can point towards blood doping. The principle is that it is possible to detect the effects of doping without ever having to find the drug."

Through out of competition testing, a profile of each rider is constructed, and any huge peak or valley triggers an investigation.  There was no guilt, no smoking gun, but the riders knew that someone was watching.

What happened was fascinating. After years of cat and mouse, the cat opened its jaws and started catching some mice –and never once with a positive test 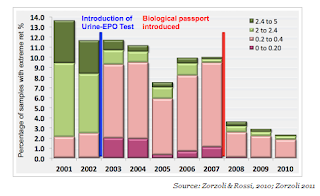 This graph shows completed tests in cycling since 2001, broken down in several ways.  The green bars represent the probable presence of EPO. The pink bars represent blood doping via a transfusion. As you can clearly see, in 2001 and 2002 the bulk of samples indicated EPO. In 2003, directly after an EPO test was developed, the green lines were replaced by pink ones. It’s surmised that cyclists changed their behaviour from EPO to transfusions in response to the new EPO urine test. What perhaps is most interesting is that the gross number of potential dopers remained virtually unchanged after the EPO test was developed; these riders just moved on to something else illegal.

Then in 2008, in came the blood passport. Both EPO and transfusion positive indicators fell precipitously. Because the riders had nowhere left to turn, no matter what drug they used, they had to stop.

In three separate instances, cyclists changed their method of operation, and it seems to have gotten to the point where the end is finally near. Not only are there fewer and fewer cloudy tests, cyclists are no longer being silent. Racers like Tyler Hamilton and Floyd Landis, along with a reluctant Lance Armstrong, have told the world their stories. The passport not only has reduced drug use, it has started to change the culture.


This progression has not seemed to come full circle in racing like it has in cycling. If bad trainers were using EPO, maybe they could switch to Aranesp. After EPO/DPO testing had been perfected, maybe then they could switch to ITPP. Maybe tomorrow it will be something else. It’s still heavily cat and mouse.

Out of competition testing and blood passports would probably help close this circle, but some horsemen groups seem to be against this ideal, in an “us versus them” brotherhood of sorts, which is curious since everyone should be on the same side with this issue. Some farms are not overly happy with an investigator on the grounds, too. Unlike in cycling, there are clear, concise roadblocks.

Jeff Gural does not have a multi-million dollar budget, nor does he have the finest scientific team on earth working up in Pegasus in a secret lab. He does not have the backing of an industry or horsemen groups. He doesn’t have a blood passport to encourage clean racing, but he does have an investigator and a will.  I suspect that he is hoping that adding another arrow in the quiver will help change behaviour – just like the biological passport does - whether a farm stands by him or not. I suspect he’s hoping that if someone wants to race at the Meadowlands who is doping, they’ll go somewhere else to race. I suspect he’s hoping that if it works, other track owners and jurisdictions will follow suit, and the game will get cleaner.

I say good for him. Without a blood passport and a sport willing to get its hands dirty and air its laundry for all to see like cycling has, it’s all the guy has left. This sport should be behind him.


at August 12, 2013
Email ThisBlogThis!Share to TwitterShare to FacebookShare to Pinterest