Racing Can Learn From Fox's US Open Coverage

The critique of Fox's coverage of yesterday's US Open at Chambers Bay reminded me a whole lot of horse racing. From insiders, the laments centered on the lack of information given (what irons were being hit to what greens, what the break is on putts, what the yardages were), and what many thought were commentators not experienced enough to talk about what was happening. The features, like the one about the talking tree, made people ugh.

However, there was some good with that bad. The good happened in two main areas. 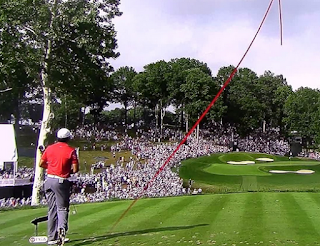 First, the use of technology to show the play was lauded. The "protracer", which shows the ball's flight off the tee was used on many holes, and allowed the viewer to see where the ball was headed, was fantastic. The split screen tracer was brilliant - this showed where the ball was headed, in real time, super imposed on diagram of the hole - and any one of us who have played golf on a video game, from Sega Genesis in 1989 to the PS4, knew what we were watching. Yardages, widths and other overlays on the screen were also given high marks.

Second, they showed us the money; the game. the match, the competitors; the drama. They let the event speak for itself.

"Fox found its best moments in the final 40 minutes of Sunday’s play thanks to a thrilling finish between winner Jordan Spieth and Dustin Johnson. The production thankfully let natural sound carry the broadcast over the final minutes. The coverage was also commercial free, which kept the tension and drama high. Of note: The on-course audio with Spieth and his caddy on No. 18 was great.."

Fox's use of technology, and letting the event and its participants speak for it were completely solid. I, like most, was enthralled and could follow the action as good, or better, than any golf event I have watched. On course mics were perfectly placed, and in a sport where not being able to see a white little ball traveling at 178 mph off a clubface, for this event I could.

Racing, in my view, can learn from the above.

I watched Ascot last week. And for the life of me I could not find my horse in any race with a field size over 8. The saddle pads are all the same color sure, but it was more than that. In the turf sprints especially, I had absolutely no idea where my horse was. None. After being frustrated about the whole thing, I called a friend who bets UK racing for a living. He told me "in 20 horse fields in short sprints I don't have a clue how the announcer gets through the race. For the most part I'm totally lost."

Here across the pond it's not a lot better. Watching the Derby on NBC I often see a blob of 20 brown horses. Watch the Orb win in the soup a couple of years ago; I couldn't find Orb and I've watched hundreds of thousands of races. Tom Durkin didn't even pick up Mine that Bird until late in his win, and Tom is a god, legend; use any word you want. Every year I watch the Derby at my ADW. Trakus, angles, I can actually see the race better.

Top TV production can't do the job, for the most part, and with racing paying to get onto television this is troublesome. On Saturday I watched the North America Cup on TSN (Canada's ESPN for those who are wondering). Close ups on horses heads, some sort of lights getting in the way? Odd angles? I was lost and I can only imagine what newbies thought. (watch it from 1:30 onwards here).

Racing, like golf, is hard to telecast.  But like Fox's coverage, it can do better with some imagination.

For huge events like the Derby I want a protracer. I want to see bubbles, or arrows or something showing me where the top four choices are in the betting, while the race is being run. I want to see an alert when a horse, like Frosted this year, makes a move that's worthy of paying attention to (think how that would work in a bar with the sound down). I want to see more. 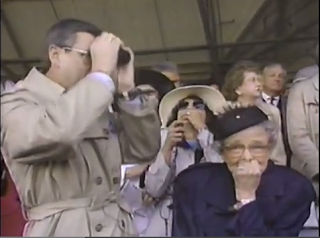 As for the participants, I want more of that too. I want to hear strategy and chatter, just like we all wanted to hear Jordan Spieth and his caddie talk about what they wanted to do with a 279 yard three wood on 18, or Dustin Johnson asking his caddie what the break is to send the match into a Monday playoff. Bob Baffert talking to his owners or jockey before a race isn't a national secret. It's a big part of the sport.

I think that's exemplifed with my, and probably your favorite Derby TV memory. Carl Nafzger living the Derby moment with his owner, who was unable to see what's happening was awesome. It was the participants speaking for themselves. It was the filter free, pure, unbridled joy of horse racing; the culmination of years or more of work, all to attain a goal that one owner, one horse, one trainer shoots for every year.

"You couldn't get that with fifty takes", said Al Michaels.

Horse racing and golf are niche sports. The US Open, the Kentucky Derby and Ascot are jewels that need to be shined up, and presented with both us - the every day racewatcher - and the general public in mind. They need to showcase the game and grow the game. Fox, with its use of technology and letting the event play itself out over the last hour, gets it. Horse racing, in my view, needs to take that same lesson and apply it to its telecasts.


at June 22, 2015
Email ThisBlogThis!Share to TwitterShare to FacebookShare to Pinterest

I have owned horses for 25 years, have been a fan for twice that, and it is no exaggeration to say that I have probably watched at least 100,000 races in that time, live or on the computer. I couldn't agree more-if I hadn't watched the race first from the traditional angle, I would have had little clue as to what was going on behind the top two leaders. NBC often makes the same mistake with the Triple Crown races, alternating shots thinking they are providing more of a taste of the action. The traditional way is just fine, thank you. (Now, I need to find a horse good enough to race in the NA Cup !!).