Something to chew on:

"NBA commissioner Adam Silver seems particularly bullish on the potential of real-time data and in-game betting. So does Mark Cuban, who said the league will "charge the casinos for information sources [and] video sources" and cryptically told Bleacher Report's Jared Zwerling that "... as technology gets better, we will invent new things." Wizards owner Ted Leonsis concurred in a recent SI.com interview: "People are now going to start to make wagers in a real-time way. You know, 'I think he's going to make a pass instead of take the shot.' And you'll be able to instantly move money back and forth. So it's better to get in front of it."

So, a league that doesn't depend on gambling, where gambling is not legal, is investing in gambling related software and infrastructure. A sport that depends almost solely on gambling has a tote system that, with late odds changes, might be worse than the one that was implemented in 1907.  See why a lot of people in the game of racing are flummoxed when you blame the competition for lost handle?

Fantasy sports, interestingly enough - an industry around since way back in about 2011 - got a bill done in Kansas to allow fantasy sports wagering  betting league playing-for-money in that state. Horse racing is allowed in what, 43 states, and some are going backwards in allowing it over the web, like Texas and Arizona.

I know, it's the weather.

"Over the past 15 months, Maryland’s three largest casinos — Maryland Live, Horseshoe Casino Baltimore and Hollywood Casino Perryville — have kicked 1,350 slot machines to the curb. That’s a 16 percent cut to their slots to make room for more table games, restaurant space, entertainment and other amenities, all of which are increasing in value.......

"This bill allows gaming manufacturers to use cutting-edge technology to meet the challenges prompted by a younger, more technologically engaged visitor demographic,” Sandoval told the Las Vegas Review Journal. Casinos and machine manufacturers are now free to pursue slot games that would mirror video games and introduce some level of skill rather than pure chance into the slot experience."

Slots are moving from games of chance to games of skill. Skill games are clearly the rage. Racing is a skill game, so you think it has an edge? I think so.

" .... it’s also representative of an orthodox tendency within racing media, a group increasingly dominated by trade-affiliated outfits (Blood-Horse, Daily Racing Form, TVG, etc.) and freelancers, who move between journalism and public relations within the industry out of necessity. It’s a tendency that makes room for unchallenged narratives"

The mainstream media is kicking some major ass on this American Pharoah story. Victor Espinoza has moved into a Kardashian territory.  And, the word is getting out that this is a skill game you can bet on, via the size of penis's. I dont know about you, but my handicapping software has 740 factors, and I can't find any data on penis size. Get on it Equibase, like the NBA is. 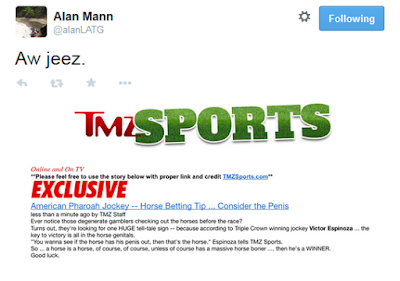 Back in 2008, or maybe it was 2012, there was a dude that broke into the diving venue at Olympics. He jumped into the pool, splashed around, and was arrested. Millions saw it, on youtube and via television. Heck maybe billions did. He was wearing a T-shirt from an online casino. Some might think that was a good way to get impressions, but when asked later, no viewer even remembered what the casino was, nor did they care. Long story short, MSM coverage like this doesn't do anything for the sport, just like the Bruce Jenner news did nothing for the sport of decathlon, or a streaker/pool jumper does for an online casino. Racing needs a message - a retargeting message, backed by some moola - and right now, for the most part, there isn't one. Over the next 4 or 6 months (or whatever is left of AP's racing career), I respectfully submit they might want to come up with one.

Yonkers carded the $1M International Trot the same day as Futurity Day at the Red Mile. In other news, the last episode of the Big Bang Theory will go opposite the Super Bowl, and game seven for the NBA Finals will be played at 2:10 AM eastern.

Alan Mann, lover of bands that no one has ever heard of, and an all around decent fellow, goes wild on his Left at the Gate blog yesterday about the Triple Crown and other musings. It's worth a read.

"Except that the moment the race was over, we began hearing nothing but economic news. We instantly began hearing how valuable this horse will be once he is put out to stud. Money. It was all about money. Potential earnings, return on equity, future profits."

He's right. In no other sport does the end result require chatter about how much money Michael Phelps or Usain Bolt is going to make. Racing is a large, large part business, and a small part sport.

With MSM stories like that, it seems there's not much written so far in this cereal box world about the pure sporting accomplishment of Pharoah.  Luckily we can share it amongst ourselves and that's been my favorite part of this TC. As a horse owner many times over I have gone through the coughs, the allergies, the sore stifle, the curbs, the kicked stalls, the paddock accidents, the clunkers and just about everything else. This horse, in a time where it's fairly rare, went through a three race stretch and finished it, in my view, better than he started it. He's a great animal, and I don't particularly give a care what the final Beyer was.

I believe we will see AP at two of the three of the Haskell, the PA Derby and the BC. I'd bet on that right now if given decent odds. If the colt was on his hands and knees Saturday, looked spent, had an issue, or was not dominant, I suspect the connections would be very wary to race him even once more. But with the way he won, and how sound the happy dude looked, I am comfortable saying I think we'll see him two or three times. That would be a lot of fun.


Enjoy your Wednesday everyone.


at June 10, 2015
Email ThisBlogThis!Share to TwitterShare to FacebookShare to Pinterest

Yes, that is something to chew on. And oh, by the way, how would such "real-time" money move? On a betting exchange platform, like that of Betfair. The very same platform that racing industry "leaders" are so frightened of (due to ignorance) that they reflexively dismiss any possibility of incorporating it.