Horse racing is always looking for game changers; mainly to bring the sport some great buzz, get on the front pages and get people to watch and attend the sport more. Movies, TV shows, Triple Crown winners, what have you, seem to fit that bill with insiders.

Unfortunately they never seem to work.

The most difficult part of the equation is that bringing people out for X doesn't really pay the bills, because the Y is betting dollars. It's a leap to show people a new coke commercial, and getting them to buy new coke forever. It's a colossal chasm between watching a Triple Crown race, loading up an ADW, buying PP's, understanding them, and betting. Until the sport charges $100 a ticket, or earns piles of revenue from shoe sponsors, or from Victor Espinoza silk sales, betting is where it's at.

Because racing seems to throw up their hands with ways to increase the bet - sometimes we wonder if they even care - here are three game changers that could, or at least have a chance, to do what all other so called 'marketing' hasn't been able to do. Increase eyeballs who want to bet, through fundamentally changing the way horse racing does its business. 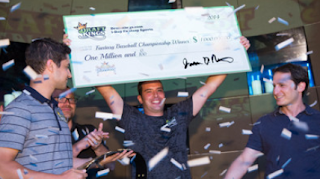 1. Draft Kings Buys Derby Wars -Derby Wars, the contest racing site, is doing well. It's a Draft Kings for horse racing. Draft Kings - a Belmont Stakes sponsor - is after new customers as they grow, and Derby Wars has those. They also have a lot of seed money in the bank, so acquisition is nothing new. Just this year Draft Kings added PGA Tour betting (you can see their commercials running on the Golf Channel all this week) and MMA, so they are on the lookout for new games to add to their menu, as well, as they try and gain market share on FanDuel.

Why not run to horse racing?

This is a natural fit and a major game changer for the sport of horse racing. Draft Kings has a younger demo, who are already prequalified to bet, and with Draft Kings promoting the sport, it can change the sport itself. For any televised event, the races would be grouped in a neat package for play. Scheduling - a long time complaint in horse racing - would be forced on the sport of racing, not unlike the way a TV network dictates to a televised sport.

Forced scheduling, new markets, a younger demo, a website with promotional dollars all playing a game that is incredibly interesting in a neat package? Sounds like a big win.

2. NBC Runs a White Label ADW - Yes, horse racing gambling is somehow taboo, despite having a carve out in government decree, and being as American as apple pie. But, if NBC ran and promoted a way to bet the races that will be on today - Derby Day, Preakness Day and Belmont Day for example - and gave out PP's, it will draw new blood. NBC would pay a regular price for the signal, and pocketing the margin, like any ADW. 20 million people watched the Belmont, with maybe 15 million of them with no wagers on the race whatsoever. If 5% of those 15 million signed up and bet a few dollars, it would bring a new demographic to betting (and make NBC and the sport money).

We all complain that TV doesn't show the races on the undercard, that they talk about everything but the betting. Well, if they're making 10% or so on each wager, you bet they'll show the undercard. And they'll talk about handicapping.

ESPN looked into fantasy betting. NBC Comcast owns a hunk of a Daily Fantasy Sports betting site. Yahoo is looking at developing their own DFS betting site. This is not far fetched. And it's a major league game changer.

3. TVG Implements Across the Board 5% Rebates - Racing's pricing is out of whack; it's too damn high. That's the reason for a lot of the so-called 'issues' in the sport. The upside down pricing model that folks complain about, offshore pirates, beggar thy neighbor economics, are all illnesses borne from a goofy priced product. When the juice is too high, what does racing do? Well, they raise it more of course, making things worse. 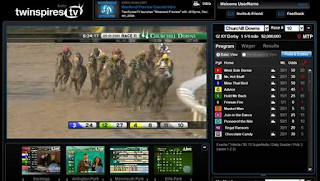 The takeout rates are not coming down, so stop hoping. The only hope to move the sport to the next level with handle increases from lower rake and higher churn will come from an ADW. Right now the small ADW's help out the cause, but some tracks won't sell their signal to them. It's a mess.

TVG can game change racing tomorrow: A 5% rebate to everyone; big players, small players, everyone. This churn will help their handles, yes, but it will game change by doing more than that. If they move away from "points for clock radios", or some promotion for points, to real money back, others will follow. The Xpressbet's and Twinspires of the world will gripe and probably try to block signals (TVG will have to have the anti-trust lawyers on speed dial), horsemen groups will yell and scream, but sooner or later those ADW's will have to fall in line by giving cash rebates.

This will spawn a new type of customer. By getting 5% deposited back every morning to play with, it will instill a sense that the game can be beaten. A portion of the people getting the rebate will pay more attention to horse racing. Instead of playing once a week they play twice, instead of playing three times they play four. The game - the hardest gambling game to win at on the planet - will get a little easier.

Getting horse racing to lower rakes is like asking PETA to start a racing stable. This is the only way it happens, and when it does, it will change the gambling part of  the sport in a way it internally cannot.

On Saturday, Triple Crown winner American Pharoah paraded at Churchill. 7,000 more fans this year turned up than on the same card last year. The NBCSN telecast, in primetime at 8, brought in 133,000 viewers, which might've been 10,000 or 20,000 more than usual. That's great, but it's not a game changer.

Game changers are things that increase the sports main revenue driver, handles. The three things above would do that. They're a longshot to happen, so let's not be naive, but if they do, we won't need to wax poetic about Triple Crown winners or Secretariat movies. We can look at real handle metrics increase, and through that momentum decide how to capitalize on them, and increase them even more.

at June 17, 2015
Email ThisBlogThis!Share to TwitterShare to FacebookShare to Pinterest

Churchill Nyra and Stronach would never allow tvg to give 5% rebates. Quite frankly I'm at the point that players deserve no rebates anymore. Derby handle and foster handle were up, even though take is higher and adws have been blocked. Horseplayers are their own worst enemy . People still bet Socal even though rebates have been cut. Tracks should just raise takeout even more. Today's player will keep betting and losing. Its sad but true.

Ah Ronnie, handle is down. It may go up a couple of dollars on this day or that day, this big day or that big day, but everything kind of stinks and has been stinking for some time. In Socal, at CD, pretty much everywhere.

I am not sure they care, but everything stinks.