Hambo vs. Haskell. Two Strategies, Only One of them Sustainable

This weekend, the Hambletonian is being contested, as part of a big stakes weekend at the Meadowlands. This is hot on the heels of another big Jersey weekend, where American Pharoah won the Haskell.

The Hambletonian, as a stand-alone event (much like say a Derby) will have a huge attendance and decent handle no matter what. If the field was comprised of claimers, the card was mediocre, there would still be a handle floor. Just send a couple of press releases out about the horses, and that's that. Most bettors would say this is exactly the method of operation in horse racing, and it has been for some time. 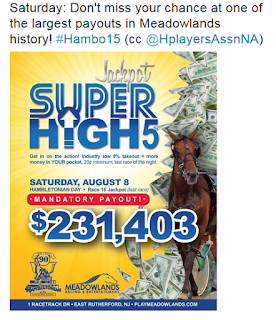 This year the Big M's first major press release didn't mention a horse. Or a driver. Or a Triple Crown winner, human interest story, or who won the race in 1935. It was about the bet.

"Great Betting Opportunities" was the title, and it talked about:

"Friday night kicks off the racing for the weekend and it begins with a bang, a carryover in the $.50 cent pick five of $29,460.76, covering races one through five on the program. Historically, a pick five carryover of this amount has resulted in well over $100,000 in "new money" into the pool which equates to a negative takeout on the bet."

As for the Super High Five mandatory:

"This pool will be offered at a takeout rate of just 8-percent (8%). This guarantees a negative-takeout on the wager on Saturday. For example, if $1 Million of new money were wagered into the pool, the 8-percent takeout would leave a net pool of $920,000 added to the carryover of $231,403.14, yielding a total pool of $1,151,403 despite only $1 Million of new money being wagered into the pool.
The scenario results in a net takeout of negative 15-percent (-15%). Historically, a carryover pool of this size in harness racing has resulted in anywhere from $1 Million to $3 Million in new money wagered on the day of the mandatory payout."

After years of tracks doing little of the sort, doing little about thinking of the bettors on big days (in fact, likely doing the opposite, as signal fees and other takeout rates have been hiked for "big days") more and more (smart) tracks are leaning towards thinking of customers. And trying to talk to them about the value in playing on that "big day", not just coming to get the kids' faces painted.

Hambletonian Day and weekend will set a wagering record, with little doubt.

Last weekend at the Haskell we saw things a little different. There was no carryover, or mandatory payout. But they had American Pharoah. Handle was up, as expected - a Derby winner drives good handle and a Triple Crown winner, on National TV sure should - and attendance was too. But that reported attendance of close to 61,000 (that may be fudged) resulted in an on-track handle of only $48 per capita, down from $70 last year.

Which method of handle generation is more sustainable? Which one might get someone interested to support the sport on a weekly or bi-weekly basis? The one where a newbie says they saw a Triple Crown winner and they'll come back to see another big race if it happens, or the one where a newbie says "explain to me this negative takeout thing. It seems like a good deal. Show me how to take a proper ticket."

There's always been a prevailing thought in the annals of racing: It needs a Triple Crown winner, it needs to be on TV, it needs to be in newspapers or on the cover of Time magazine. If only that happens, people will come to the track, come back, and the business will grow. Well, converting those people has been (and will likely end up being) cost ineffective, and small in number. It's like asking someone to enjoy the biathlon in the Olympics on TV and then start learning how to shoot and ski. It's hard.

What's not as hard is promoting what you are - a betting game. Give newbies value - attack the mindset that racing is for suckers and keep your money in your wallet - give them something to get interested in. The ones who enjoy mental pursuits, maybe bet before but got out because they never win, or have a general interest in numbers might just give the game a look.

at August 05, 2015
Email ThisBlogThis!Share to TwitterShare to FacebookShare to Pinterest