There was quite a conversation on the twitter about Hong Kong Jockey Club betting growth this early evening. Hong Kong, since 2006, has rapidly grown handles, and has been reaping the benefits of such growth.

"The record turnover this year is the result of a lot of hard work. Since the 2005-2006 season, turnover has increased 79.7%, which is testament to the successful strategies the club has undertaken in that time to revitalize Hong Kong horseracing," Engelbrecht-Bresges continued."

Hong Kong's betting growth was spurred in large part, due to a change in policy in 2006, "Betting Duty Reforms". This change allowed the Club to pay revenues to the state from gross profits, instead of from a set amount of takeout. The club began trying to get back lost punters who were frequenting Macau (with lower takeout), investing more in the customer, through various reforms, and, in general, using good old fashioned business school metrics to increase wagering.

In effect the opposite of what is done in North America, where slices of the takeout are still looked at as a piece of the pie (that shrinks).

This is illustrated here. 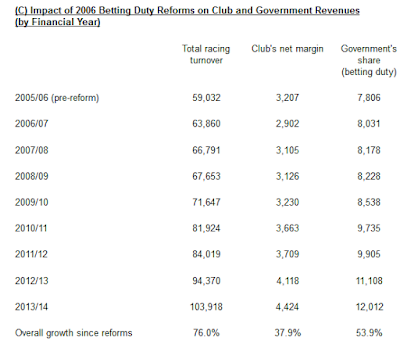 Notice that during the increase in turnover (handle) from 06 to 09, margins to the club (profit) did not increase. This is 'taking a smaller piece of the pie, to hopefully increase the long term growth of the pie'. Then, handle grew enough where margins increased to a record $4.42B in 2013-14.

The HKJC was freed up to increase turnover, and that, in part, helped it achieve their goals, for their horsemen, their charities, their club and the government.

Will this happen in North America? No. Horsemen groups (see California and Kentucky at Churchill) along with racetracks are trying to take more margin, rather than take less. That, in this environment, decreases handles, and we are where we are.

Have a nice Tuesday folks.

at August 25, 2015
Email ThisBlogThis!Share to TwitterShare to FacebookShare to Pinterest