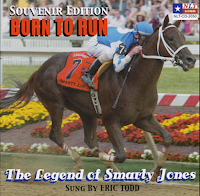 For those who have been around Thoroughbred racing for awhile, we all know the horses in recent history who competed in the Triple Crown. You could have not read about and followed Animal Kingdom, or Mine That Bird or I'll Have Another the last several years, on social media and elsewhere. Some of these horses, though, have captured the imagination of the public, and some have not done quite as well.

For the last few that have competed for the Triple Crown, i.e. in the box when the gate springs in the Belmont Stakes with a chance at glory, the google search stats are below. 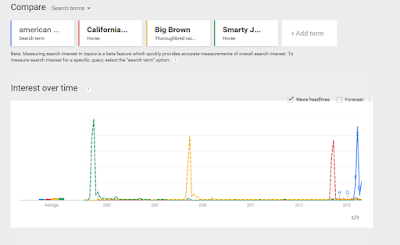 The highest rated horse in terms of search interest is not American Pharoah, it's a horse who, of course, never won the Triple Crown, Smarty Jones.

Sometimes we forget the charisma, and backstory, the colt had.

He jogged in front of 8,500 - it seemed on the short side - at Philly Park, of all places, and at least part of this draw was his everyhorse status:

''I'm here for this wonderful Cinderella story,'' said Lois McKeown, who arrived at Philadelphia Park at 7:30 a.m. so she could get a nice location along the rail for Smarty Jones's public gallop. ''He is the Seabiscuit of our times.''

The above graph can be interpreted in many ways. But, regardless, it took me by a little bit of surprise. American Pharoah is everywhere in this internet world. The free column inches are humungous. He achieved what Smarty, and others, could not do.

But there's old Smarty, way back in 2004, leading the pack. The charismatic little colt with a backstory that people absolutely loved has a place in racing history, and will likely be remembered for a long time.

at August 14, 2015
Email ThisBlogThis!Share to TwitterShare to FacebookShare to Pinterest

I was very disappointed when Smarty Jones retired. I thought his Derby and Preakness were fabulous. Not to redboard, but I felt much better about AP in the Belmont than Smarty. Ap is a freak that can adapt to any pace scenario , while Smarty didn't rate quite as well imo. I believe AP would have beaten Smarty on their best days. The only 2 3yos I've really seen that would beat him were Holy Bull and Seattle Slew and maybe Easy Goer on the right type of track. Of course Secretariat is untouchable, but I was only 5 when I saw him run and didn't really earn my racing wings until I was 8 or 9 lol.