Racing has interesting subsets of customers. Of course there's the gambler, looking for a score. There's the participant, who earns money from the sport. And there's a fan, who may bet a little, but he or she mainly watches racing, because he or she loves racing.

In many sports, these three subsets of customers happily mix, and almost all the time their interests overlap. In the NFL, for example, a gambler might want better injury information. But so does the fan, and so does the opposing coach. A player might want lower ticket prices because they want to play in front of a packed house and this is what the fan wants, too. It's all simpatico.

In racing it's not like this at all. The gambler - who might want higher field size and lower takeout - is completely at odds with many participants and fans, who seem to want to work against them. It's almost like it's a challenge of some sort, like a grand boxing match of yore.

"If only those gamblers were just like me," you'll often hear in pleading fashion.

Why this happens, I don't really know. But one thing I do know -- thank goodness gamblers are gambling.

Here's a breakdown of  revenue by sport (mainly from a European perspective): 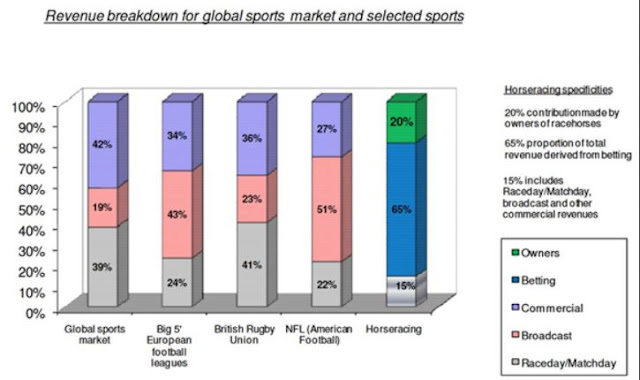 What you quickly notice is that other sports make money from the gate, from being shown on television, and from selling commercial items, like shirts, hats and game gear.

Racing doesn't sell Todd Pletcher jersey's, it pays to be shown on TV, is not paid, and raceday revenues are miniscule, especially in the US (these are Europe gate numbers)

Racing makes the vast majority of its revenue from bettors.

Why the blue bar is so important - other than the obvious - is that this segment is the most malleable.

High juice, worse races - these players slowly leave. When the blue bar goes down, everyone loses.

Also, the blue bar represents a $500B to $1T worldwide skill game gambling market. Horse racing has only a small slice. It can grow, if the sport caters to them.

The grey segment and green segment are both more static, and it takes a Mack truck to move them.

“One vestige of the TV-industrial complex is a need to think mass. If it doesn’t appeal to everyone, the thinking goes, it’s not worth it. No longer. Find the group that’s most profitable. Figure out how to develop for, advertise to, or reward them. Cater to the customers you would choose if you could choose your customers.”

Racing must choose the customer who i) brings in the most revenue ii) can be easily catered to with change and iii) will respond with an elasticity that can bring in the most return on investment.

That's the blue bar. Why so many in the sport fight against them is a great mystery.

Takeout, field size, and other betting customer issues are the most important issues for this industry to address. When or if that happens is anyone's guess, but I can unequivocally say - until it does this sport will grow smaller and smaller each year.

at May 23, 2017
Email ThisBlogThis!Share to TwitterShare to FacebookShare to Pinterest

The word is that It is unsafe for racetrack management to venture into the forbidden blue zone. There are many gory rumors about its inhabitants. Those in management who venture out come back quickly.

I once heard that Chris Kay left his own customer seminar before it ended because he scheduled another meeting. It was a wise choice, indeed.

Brilliant. Thank you for writing. Too bad for horse racing issues such as animal abuse and gambling addiction get in the way of marketing and popularizing a such a wonderful sport. Would like to see more shows on TV like the Horseplayers, more focus on the entire teamwork involved (including grooms, exercisers, vets, & aftercare), and more access to data like workout videos and vet records. This would do much to support new fans and gamblers alike.

Maybe market more to bored little old boomer ladies with disposable wealth and the intimidating specter of a seemingly indecipherable racing forms and boozy frat boys/crusty railbirds preventing them from injecting some life into the sport. Good target for the owner pools too.