We tend to have to deal with quite a bit as horseplayers. High take, inquiries, horses racing bad. It is a tough game.

Bad beats drive players nuts. I have gotten that out of my system over the years. We discussed them before on some handicapping topics. You have to stay sane to play the game - no ifs ands or buts.

We do not chat too much about bad beats here. After all, we all have them. We have all missed some scores. Just because I have a blog there is no use going through them all. Not to mention, after a few minutes they usually fade away anyway and I am on to the next race.

I bet a lot of races - tons of them. Over the years I shudder to think how many. Today something happened that in all those years has never happened to me before. If I heard this happen to someone else I would probably share it, so I figure what the heck. If you don't like losing bet stories, stop now. You are forewarned :)

I am having a little lunch today, tough week. And decide, since I downloaded all the tbred stuff today, I would have a look at it. I flip on to Aqueduct Race 5. I see this (click for a clearer look):

The two in the 5th looks great. Good speed, excellent models on my software that I have written based on AQU's track, and these speed horses in general. Green light, especially at 6-1.

So I take some supers and some ex's. I use the 5 (a bomb) and 6 (a shorter shot) as my key horses. My two horse jogs and a three horse photo happens behind him between the 4,5,6. I need the six second or third for supers, and the five second for ex's. Well, the 4 horse photos me out, and the five photos the six out. $5500 super and a really nice ex gone, so no luck there.

Then I flip to the 5th at Woodbine going off not far after. Here is my sheet: 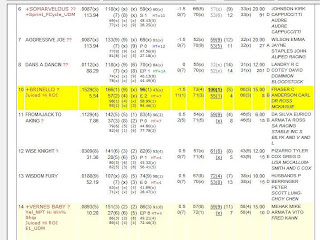 The ten looks great to me. #1 speed and a "High ROI instance" for horses over 10-1 ML that I have monitored over the last two years of cards. Worth a poke. But holy smokes the 14 looks solid too for a bomb. A nice speed model for horses at this distance too. Well, let's go superfecta hunting!

I play a 20 center, throwing in the four (chalk) and the six with a Fcycle model:

I took a small break after that and came back for the AQU seventh race. This is what I saw (I told ya I can't tell just a regular story with two in a row):

The 8 horse might just be a good play. Holy cow she is 30-1 and ranked first. What the heck, let's take a swing. The three, six and seven look like the uses behind her. So I take some ex's and a super.

The 8 looks to be cruising to victory, but 50 yards from the wire goes nuts and interferes with the seven and she checks. But the 8 goes on to win easily. Regardless, inquiry!

Easy pitch I thought and it happened that way. No win money at 30-1 and another lost superfecta that would have paid big dough. The 7-8-6 is no good to me, although I am sure many were happy as the seven was well bet.

One beat in a row for a good score is alright. Two for a monster score is a little less alright. Three in a row? Never in my life. Not even close.

Whoever says the game is easy has obviously never played a race in his life. I know, I know: I am preaching to the choir.

OK, thanks for letting me get that off my chest. Time to get back at it. It's been a long week and I need a little more racing. I wish everyone of ya good luck! I hope one or two of you even made some cash on those races that I got squirted on. I might as well pass along some dough to you guys who put up with and read this blog!
at October 30, 2009
Email ThisBlogThis!Share to TwitterShare to FacebookShare to Pinterest