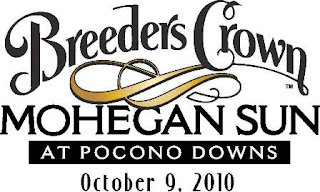 This weekend harness racing puts on its yearly show at Pocono Downs. The year end championships are always interesting to watch for fans and bettors as well. In the past the races have garnered significant handle, however for the first 15 years or so in the series, the bet has been almost an afterthought. As with many tracks and organizations today, working the bet has finally been placed on the front-burner. Customers matter.

One organization that has been much more proactive than most to up the bet and build the brand has been the Hambletonian Society. This group, who runs both the Crown and the Hambo, have tried things many other tracks and groups have failed to. For example, they were behind the "Metro Six Shooter" earlier this season which generated some buzz, and did work to promote a decent sized pool.

Not long ago the group asked "what kind of bet can we offer, and how should we go about it" to several bettors. The feedback was pretty good. Most of the ideas involved offering out a pick 4 or 6 which is seeded. As well, takeout was paramount. As most of you know, Mohegan-Pocono has some of the highest takeouts in North America (which they did reduce back in August), so this was a pretty important thing to tackle. We have to remember The Hambo Society and others like them do not run the tracks, or the government, so it is not like they can walk in and change takeout, or seed $500k pools etc. They have to work with the current structure of the track in question.

Mike Kimelman of Blue Chip farms is a dude who gets it. I have spoken with him before and he almost sounds more "bettor than breeder". In an interview with Norm Borg, he highlights this weekends betting offerings, as well as a bit about the process in scheduling post times and the Australia export. These items will put a smile on a lot of your faces because these are techniques you all have spoken about here for quite awhile.

"According to Mike Kimelman, the night is offering the bettor a great card as well. Pocono's wagering menu serves up a $10,000 Added Early Pick 4, a $20,000 Added Pick 6 and 15 per cent takeout. Kimelman notes that Australia will pick up the Breeders Crown card for the first time and many tracks will be arranging post times to allow for customers and fans to watch and wager on their local track and the Breeders Crown simulcast without missing a minute of action."

This years Breeders Crown card is at a new track, a lesser known track, and a track which has not exactly lit a fire under bettors feet. You don't just put on an event any longer and expect people to march a path to your door. Nor do you offer out one bet, or one technique and change twenty years of lost handles. But you do try; try and build year over year, to grow. The Breeders Crown is doing exactly that, and the people there should be commended for doing it.

I will update the Crown this week here on the blog with free pp's and some links for some analysis. With a 15% take and seeded horizontal bets, these races should provide some serious horseplayer value.

The card is simulcast on every ADW that I know of, HPI in Canada. TV coverage is on an HD channel in the US (commercial below). Post time is 5PM this Saturday.

at October 05, 2010
Email ThisBlogThis!Share to TwitterShare to FacebookShare to Pinterest