Last night's Breeders Crown at Pocono might have not set the handle world on fire, but for a first try at a new (lesser-known) venue, the event from a fan point of view was certainly a success. There were several marvelous performances, and some curious ones that stand out and make us take notice.
A few items from last night that crossed my mind.....

The 3 year old crop is not one of the best ever, it is totally average. That glamour boy final last night was about as deep and competitive as a Washington Generals basketball game. After I watched Nihilator race as a kid, each year I would gain more and more respect for him. As time goes on I gain more and mor 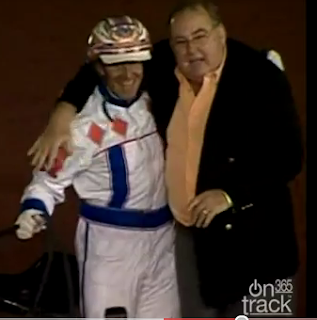 e respect for the Beach in almost exactly the same way.

Phil the Thrill Hudon. What a great performance. It is no secret that drivers are given a good deal of importance in our game, however capable every day reinsman can, do and will get the job done with ease. Phil probably holds as many lifetime marks on horses than many other drivers, so for those that think drivers 'make them go fast' he is fine on that count. Maybe he makes a mistake or two more than JC or Brian; however he proved to everyone that if the big money is on the line, he can do just fine.

Big Jim II. Is there any owner out there who does not respect Jim Carr. What a breath of fresh air for our sport. He has probably heard 1000 times "take Phil off your horse and put X down" and he stuck with him, in a game which has about zero loyalty anymore. Take a look at the youtube interview of Phil and Jim below. I love, love that about harness racing - two small guys swimming in the shark infested waters and showing their joy and pride about winning a horse race they might never win again. The hug at the end of the interview is priceless (interview starts around 8:50)

Has Shark Gesture had enough? If he has.... what a horse and what a career. He might be one of my favorite horses of all time.

Lucky Jim jumped it off last night at low odds. His old rival picked up the spoils. In the post race interview we got a glimpse into a trainers mind when PK spoke of Enough Talk's issues and that he was "finally right again". People love to humanize problems when a horse is racing badly - no matter what the breed (bad driver/ride, trainer is dumb etc). 999 times out of 1000, it is because the horse is not right, or something is bugging him. Enough Talk, when right, is a fantastic horse.

I missed the first pick 4, mainly because of poor ticket construction. I went "all" in leg one, which was won by a 30-1 shot. Then I liked 1457 in leg two (won by Break the Bank), See You at Peelers was my key and then four horses in the last leg, including the winner. I mixed and matched those with caveman tix and ended up keying Lucky Chucky on the "alls" in leg one tickets. It paid fairly well at $14,000. I played small in the pick 6, but missed that as well.

Anyone catch any bombers? It was a great night if you went deep, especially in the ever-interesting trots.

at October 10, 2010
Email ThisBlogThis!Share to TwitterShare to FacebookShare to Pinterest

FYI, according to the Times Leader, the total handle was $2,250,820. Certainly not the handle WEG, Meadowlands, Yonkers and even Balmoral would have pulled in if they hosted it but considering their average handle is likely south of $100,000, not too shabby.