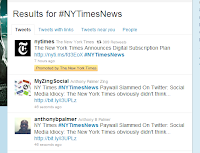 Whoops! In one of the more flagrant social media boo-boo's, the New York Times decided to buy tweet time announcing their "paywall". Why would they pay to announce they are now charging for news on the free-media, young and down-with-old-establishment twitter? As one scribe puts it "It's like PR suicide: the Times of New York serving itself up for lunch, to be eaten over and over again." The screenshot to the left shows what happens when you click the hashtag. Not exactly good marketing.

I don't really know why the harness media puts out feel-good pieces on some individuals. Sure it's news that Lou Pena won six races at Yonkers, but your average every-day horseplayer is not overly happy about it, and neither are many owners.

Tweet of the day, from Phil Juhring "Chester today ... where the temperature should barely exceed the take out."

The story that racing will try and not promote too much, but will have lasting-legs on its own - the scandal at a well-known horse retirement farm.

In Ireland they have chosen the slaughter route for some thoroughbreds.

Bill Finley looks at the good news out of Hastings Park via the take decrease. It is nice to see them realistic about year one as well - they are looking for a 5% to 10% bump in handle.

More good news for thoroughbred fans. Trackus is being looked at for CDI signals, including Churchill Downs.  Add a free API for software players and we are away to the races.

We can say what we want about Woodbine - and the buzz from the years 2000 to about 2008 was poor with players - they have been on Trackus for awhile. Their poly is pretty good and they have tried some things the last few years, like the $100k Pick 4 guarantee for harness April 2nd. They are turning the corner and they are a track to put on the radar.

Ralphie9 watched Betfair being played yesterday for the first time.

"Jamie E. Cool dude, explained BetFair to me, we even played some bets. Neat stuff, I suggest NA racing gets on board. The Volumes are crazy.. $1 mil + bet on every race. We get that on 13 race cards. Craziness how much it would help racing $$ wise and interest wise. Ratings would be way up.. We even made $372 in the last 4.6 seconds of the NCAA game when we bet against the Louisville Losers. Morehead St. came to play, fantastic action. Love the Madness."

Randy Waples' new harness racing trailer has been receiving comments from all over. I can't comment too much because we have seen so little, but a thoroughbred fan and tweeter extraordinaire Sid Fernando chimed in after seeing it:>

"wow! Blown away by that. Great production values, plus I'm now intrigued by harness off that clip. WTF?!"

I recently changed my cable package and grabbed Animal Planet. I finally got to watch Jockey's the now-cancelled reality show on some of the riding colony at Santa Anita. I hope the new harness show is not patterned after that show, because I can see why it was cancelled. I think it's horrible.

In addition, showing the accidents for a show trying to capture a female audience is, well, like the New York Times buying twitter time to announce they are charging for something that was once free.
at March 18, 2011
Email ThisBlogThis!Share to TwitterShare to FacebookShare to Pinterest

That's really nice of Brad Cummings and Ray Paulick to *pimp* out Chantal for increasing the "relevancy" of the game. What the comparison to Danica Patrick fails to mention is that Danica selling her sex appeal has done absolutely nothing for IndyCar's bottom line, indy car racing is actually more irrelevant than horse racing.

"Jockeys" was indeed horrible, thank goodness it is over. Who in the general population really needs to see staged relationship troubles/jockeying competition over dinner between Mike Smith and Chantal Sutherland? Or watch them eat dinner? Does anyone outside of racing even know who they are? Oh, right, Brad Cummings - probably jealous. Whatever. Staged anything. Reality TV for racing is just a horrible concept.

Here is the latest on the retirement farm/organization fiasco: being investigated by the state of NY: