Kegasus Wins Out Over Some Big Names; And I Have Them 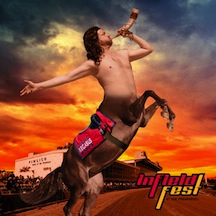 Kegasus, the half horse, half slightly chubby man was announced as the new mascot of the Pimlico Infield Monday. Call me crazy-sus, but it seems Pimlico might be going after the under 30 beer-drinking crowd with this one. Time will tell if this is a good move, or a bad one.

As you all know, I like to break huge secret news on the blog and I will again this morning. I have spoken with some of my chipmunk spies who have access to the high offices at Pimlico. They tell me that although Kegasus won out, it was a wild battle because there were other candidates.

Here - and only here - are the super-secret nixed infield mascot candidates. Take that Bloodhorse.
I can not be 100% sure the above were all considered, but that's what I hear down the peanut vine. After reading it, I think the dude with the set of fetlocks and a spare-tire was probably a good choice.
at March 31, 2011
Email ThisBlogThis!Share to TwitterShare to FacebookShare to Pinterest

NewYorkus Cenaturdus - a now extinct form of Democratic politician that lived in a corrupt casino fairyland where under the table deals and hip hop cred would get you anything you wanted. This creature has now been exposed for what it really is - a horse's ass.

New york tried to send an entry for consideration but it got stuck in political red tape.