Usually top trainers go with their safe bets with horses turning three, but Jimmy Takter is not one of those. I could not agree more with him about Grams Legacy. This colt is a monster. I watched his qualifiers last season and his second where he was coming home like a rocket and broke showed his potential. I bet him first out where he was babied around the track (at a juicy 5-2) and he looked good again. His issues caught up with him, but the raw talent was always there. If he is right this year, watch out for this horse.

Takeout increases don't work. When hula hoops were losing popularity Wham-o did not juice the price of them upwards, they got to work and created the Super Ball and Silly String. The reporting in the racing press on this issue, which now apparently involves regurgitating press releases, is embarrassing.

The psychology of cheating. Interesting article. Hat tip to O_Crunk.

No love for Oaklawn announcer from Saratoga Spa.

Bob Pandolfo has been surveying the landscape at the Meadowlands. He says the older tellers are defiant and the younger ones are willing to work.

The world of sports with cricket and soccer and horse racing is kind of comical when it comes to match fixing, solely on reaction. Bad people fix a race or a game and try to profit from it. Reaction from the sport: Blame the bet taker! It's like blaming Henry Ford when a guy crashes into a stop sign after 16 beer.

The Kentucky Derby betfair odds have tightened up now that the graded earnings picture is becoming clearer. 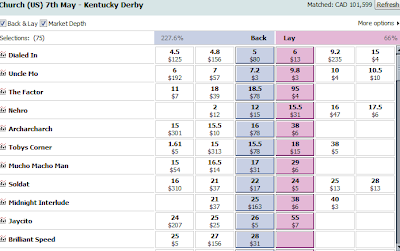 Some dude wants to bet $4 on the Factor at 94-1. That's about fair for me, but for the important people who make the decisions, it looks like a slam dunk.
I got filled in on an interesting in-running race a couple of weeks ago in the UK from a professional betfair player. A 7-2 shot took a lead in a 6f race, was comfortable the whole way, was headed at the top of the lane, and came back on and won. We see it dozens of times a day, right? For some reason someone did not like him when he was headed and layed him at 1000-1. $91 was matched at that price.
Rumour central: St. Elmo Hero blew a shoe and had a foot issue after the loss Saturday. Believable, as the track was prolly like cement after the rain.
Gene says: Derby Wide Open!
at April 18, 2011
Email ThisBlogThis!Share to TwitterShare to FacebookShare to Pinterest

What Pandy is saying makes sense. A lot of the older tellers are collecting social security so while some use this money to make ends meet, for some of them it is beer money; so who cares? If they lose this job and they are under a certain age, they don't get hit with the penalty for earning too much money on social secuirty.

The younger guys are still raising families and need the income.

That being said, I think this battle is not even about the Meadowlands but Monmouth Park where there is no contract at all.