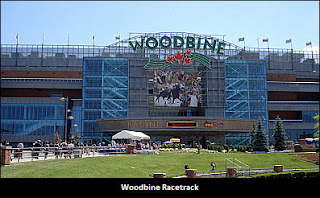 With a good opening day handle, an excellent harness promotion and some other bettor-focused policies, Woodbine again is becoming a player in North American racing for long-suffering punters. If you try, people will notice, and they are.

For a good number of years (the post monopoly years) players, fans, some execs and some pundits were always stumped at what they saw was a lack of effort. After 100 years of being the only game in town, where "if you build it, people will come" was the rallying cry to some success, it was something that took awhile to change. Sure, there were gym bag giveaways, maybe mugs or a poster were handed out, but very rarely did a track venture to the deep heart of the problem - attracting more and more people to want to sit and handicap and bet - your product.

Woodbine Entertainment was a poster boy for this system (just read the comments on this blog from horseplayers since 2007) and players were fed up, leaving in droves. They had long had enough.

However now, things appear to be changing, and it is not one-off change, it is becoming (to borrow a phrase) "change we can believe in".

Yesterday was opening day for thoroughbreds at the Rexdale track, and this year there was some positive buzz. For the second year in a row they dropped their tri take, which is still a high 25%, but it is getting there. This move was filtered through the handicapping world and players seemed to see some hope that the track is beginning to want their business again.

There have been other positive player changes the past 12 to 24 months, much of it what players like me and you have been asking, for a long time:
The results are promising.

Opening Day in 2008 barely broke $2 million in handle.  This year they did almost $3 million.

Not to be outdone, the harness side had something happen that rarely does: Some positive buzz.

Woodbine Harness (with the Meadowlands faltering) is the premier harness product in the World. But the handles do not reflect that. This past little while, some new things have been tried. Saturday, Woodbine pumped the $100k guarantee in their pick 4, for the first time ever (even advertising on the HRF ad network to fans they don't normally reach).

Would they hit it? Would this be a horrible error? After all, $100k in a Woodbine pick 4 is something never seen, certainly in a wintery April.

On WEG's signature harness day - the $1.5M North America Cup - where over $3M in purses are given away, 20,000 fans cram the tarmac at Mohawk after being bombarded with media, and the race is shown on national television, the handle barely breaks $3 million. Saturday, with the guarantee, some advertising to punters, and some positive buzz, the handle was $1.8 million. We don't see that number any more for Saturday harness; but we do now.

Several years ago here on the silly blog we were all chatting about Woodbine. They just raised their takeout on pick 4's 15% to 25% (or thereabouts, and you were pissed), all the talk was about offshore wagering  from the brass there, and players felt like they were speaking to people who never made a bet in their entire lives. As handle was circling the drain, both insiders and punters lamented "why don't they try something positive for customers - anything!" Slowly but surely something happened - they listened and responded.

If Woodbine continues on this course, with new bettor centric ideas (like a 15% take pick 5, for example), continued lower takeout, better distribution and rebates, and confronting the elephant in the room of the too-low pick 4 minimum, they could be a major force on the Continent with serious horseplayers. With places like California suffering where dedicated bettors are abandoning the product, the door is open. Let's hope WEG continues to walk through it.

What kind of horse is St Elmo Hero? A good one. That was a marvelous effort last evening for a colt with foot problems and time off. A hard move to the front, a retake around the turn after being attacked by Mark Mac off a quick third panel would normally portend a loss. Not this time, because good horses don't use excuses.

Speed and trainers rule the roost at Woodbine thoroughbreds in April. Wesley Ward (who was 7 for 20 here last season) has good stock and sends them ready. He won 5 races. Yesterday, for value players he was shut-out, keying a nice hittable $5,000 pick 4, proving you can't be hot all the time and as bettors, we must take stands against the on-paper obvious to win at this tough game.

Layover time in the Spring Championship last evening at the Bine. Hypnotic Blue Chip is a top pacer, and despite being so far back, he fired home beautifully to win. If St. Elmo was on the front end, it was a different story, but Lisagain is no St. Elmo right now. Regardless, Hypnotic is a horse to watch this season in all the major (non-half mile track) stakes.

Florida Derby. I am reading on chat boards and via twitter how Dialed In's win was not impressive. I completely disagree. This was an impressive prep, and if he moves forward, Uncle Mo and Premier Pegasus better keep a keen eye on his saddle pad.

USTA Strategic wager is a success in opening weekend. Balmoral's guarantee was blown out of the water. The Chicago oval continues to impress since changing the takeout on the pick 4 from 25% to 15%. Handle is up over 80% and  overall handle has been trending upwards as well.

Kentucky Confidential continues to gain steam, with $2400 pledged. Keep it going.
at April 03, 2011
Email ThisBlogThis!Share to TwitterShare to FacebookShare to Pinterest

I was watching the conference in MTL when you were on with Jamie Martin about many of these issues. There wans't a lotta love!!!! It's nice to see some now since they are finally getting their butts going on some of our complaints.

.... Drop another few points on tris and supers, give us back the 6% they and the horsemen stole from us in 1997 when Harris allowed them to ease juice, and we'll be okay

Youre being too easy on them - they have a long way to go before they win me back.

Regards, Ill play poker because they pushed me into it

"This was an impressive prep, and if he moves forward like he should, Uncle Mo and Premier Pegasus better keep a keen eye on his saddle pad. "

The irony of this comment is that it is precisely Dialed In's greatest weakness that will prevent them from seeing him at all –unless he passes them late in the race.

What do you mean re. taking a stand against the "on paper obvious"? It sounds like redboarding. After a guy wins 5 out of 6 on opening day (one 2nd),you expect someone, anyone, to take a stand the next day? That's why I'm out of the game. Don't take this the wrong way. I have moved over to "the other side" and absolutely enjoy reading your blog. I just get worked up when I see the 30% trainers are getting close to 40%.

Hi Anon,
I see what you are saying, but the point I was making is that to make cash at the game, a la Mark Cramer, you have to have the guts to take stands against what everyone sees. The takeout is too damn high. Logical horses can pay $1000 in a pick 4 if there are a few legs with something obvious, that everyone and their brother will be keying on.

Whereas a lot of folks would be keying Mr. Ward's horses in the pick 4 (where he had three horses in the sequence) - and rightfully so on paper - going deep and playing against the crowd can sometimes pay off.

"Pullthepocket
Wonder if the pick 4 will be overbet at WOX if WW wins 5th, 6th and 7th races? Time to chuck him out and take a poke I guess.
20 hours ago"

Win or lose I believe it is a sound strategy.

It's a tough game out there, and I look for opps like this at times, because I feel it is the only way to make money.

What is an "out of the woodwork" super trainer?

I'll try and answer that: A trainer who is probably under 30 years of age, has a career average which suggests he/she could not train a golden retriever, whom overnight starts winning at 32%. It happens with both standard-bred and thoroughbred and if you are one of those trainers, you should probably avoid Woodbine.