We've seen it too much in racing: A $1M or more winner, toiling in a cheap claimer, getting beaten badly.

The Dubai Race Night blog focused on one of those times yesterday - $1.4 million dollar winner Diamond Stripes.
We don't have any details (yet) - maybe his current owner plans to retire him. Maybe the old owner is coming back for him. But it always spurs some anger, regardless of the situation; and some bad PR too. It also provides us with a harbinger of the bigger picture, and why it's so maddening: If we can't even retire a horse, or be responsible for a horse, who has made someone over $1 million dollars, the rest have little chance.

A lot of times we hear the good stories, like the one not long ago regarding Armbro Proposal. The hard-hitting millionaire was racing in a cheap claimer in London. One of the old owners got wind of it, drove up, claimed him and brought him home. Let's hope something along the same lines happens with this guy.

Moral suasion and promoting the good stories as an impetus is about all we have in racing for situations like this. There is no policy and there probably should be. If we want to give groups ammunition against us, the argument "look, they don't even care about million dollar horses in racing", help our opponents a great deal.


Turf n' Sport gives us his Christmas wishes. If you bet more than $50 a week in racing, I suspect you will be nodding at each one.


When we see a horse being managed poorly - raced too often, brought back too quickly off an injury or sickness, and many other things - it rarely turns out well. It can sometimes take months and months for them to get back to being sound and happy, and sometimes they never get back. Horse management 101 - Chapter Seven. He had issues all year, but his trainer is first class, and his owners are too. See how they did it.

Betfair is doing well, and their mobile apps are good too. 41% of their customers placed a bet via mobile in November.

Trakus was a topic today for John Pricci at HRI. He'd like to see more info about distance traveled. We do that in harness already, and it is kinda neat. Notice the "DT" line on each program raceline for each horse. 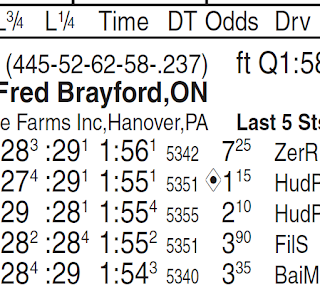 Enjoyed today’s piece..
Back when we were doing Boardwalk which was probably the first multiply owned horse venture, it was obvious that the owners-all successful entrepreneurs in their specialty fields could not and would never grasp the nuances of the horse business as it simply defies conventional business logic.
Buy a Lexus for whatever and there’s a book that tells you what it will be worth In 12 months given the mileage accumulated and the business man can reasonably project how long he wants to keep the car.
Buy a yearling for whatever and there’s no way of knowing its value in 12 months assuming it has any value at all.
Kind of like drafting a kid out of college and paying him the going rate for his position and discovering that he can’t make it in the pros…
Buy an expensive broodmare in foal to a superstar and it comes out crooked.   Of course given her tough delivery, she’s a bitch to get back in foal and maybe after four years you wind up with two saleable horses though the second one no matter what it looks like will be penalized by the non performance of the ‘crooked” first one.
Racing offices bend over backwards to accommodate horsemen regardless of whether or not their staging bettable races.
Most judges have never handicapped professionally and are virtually traffic cops who don’t push the button unless there’s a visible infraction.   Form reversal??  Whats that???
If a racetrack exec never apprenticed as a public handicapper in which his weekly take was determined by the number of winners he could pick, how the hell can he have a clue what the people in the stands are there for..
That is when we had people in the stands….
Raise a gorgeous yearling colt and maybe 10 days before sales time it hurts itself in the stall and has a noticeable bump.
I could go on forever


We could go on forever too Bob. Thanks for the comment. Enjoy your Thursday folks!

at December 15, 2011
Email ThisBlogThis!Share to TwitterShare to FacebookShare to Pinterest

I followed Diamond Stripes since I was a young teenager. That's when he won the Meadowlands Cup and Godolphin Mile. The big question is for Rick Dutrow as why he was layed off for so long after his Goldolphin victory. He raced once more for Rick Dutrow in 2010 and than was sold to a new owner.