Dana Byerly of Hello Race Fans looked into her winnings from exotics at NYRA tracks (which are eligible for a 1% rebate) not soon after the overcharge was announced.

She came up with the following: 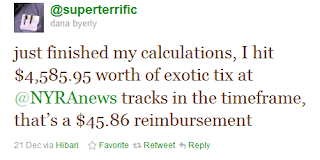 $46 back might not sound like a whole lot of money, but it illustrates the power of that 1%, even for one person, with regards to handle bumps.

Dana clearly will not ask for a $46 check in the mail. If she does get it back, she'll do like we all do; she'll rebet it. When she does rebet, she will win a little money back more than likely, and perhaps churn it five times. If she does that, her handle has gone up by $230.

It's why we've always said takeout reductions do more than just churn - they make the game more fun, and a fun game is a game people want to play. Dana will have some fun with that money, because she will have $230 in free bets.

This is being illustrated pretty well in California, on the other side. Their handles have fallen since they raised the takeout last year, but not only because "X" number of horseplayers boycotted - although I am sure that made a difference. When you take 2% out of the players pocket, they have a lot less to rebet. The game is less fun, too, and nickel money lines for a baseball game start to look pretty good.

It's no secret that when slots come to racetracks, handle can still go in the dumper as witnessed in many jurisdictions. On-track handle is especially at risk because now on the way home from the track, gamblers who made a score in the last can lay $500 of tomorrow's racings bankroll in a slot machine.

Charles Hayward, NYRA CEO, announced today that the 2% takeout decrease to make up for this mess will not be only for 15 months, it will be permanent.

With a 2% reduction in takeout starting January 1st and a small bump in field size, NYRA may have a very good year in the handle department. If they expand it and spread some of this new found slots money to a 1% across the board reduction in churnable WPS or exacta pools, it could even be a great year.

Whatever happens, we do know that this season people like Dana won't have to wait 15 months to get back the money owed to her so she can rebet. She'll get it back when she hits her first grand slam, and she'll keep getting it back every exotic hit after that.

at December 27, 2011
Email ThisBlogThis!Share to TwitterShare to FacebookShare to Pinterest

Why the assumption that she will not ask for the $46.00 bucks. In these economic times, maybe many will need the $46 bucks. I think this points to the arrongance of the whole situation-they (the bettors ) don't need the money anyway, so lets screw them.

Interesting that pick 6 plays are voided from the mess via statutory "price setting" upper limits on pricing, reducing NYRA's liability. That's what I take from this statement. And it disgusts me.

Anyway. Even if it took a monumental blunder to start lowering takeout, I'll take it.