Frank Angst reported a few more items today in the Thoroughbred Times on the NYRA situation.

A long-time player who a lot of you know, Joe Riddell was none too pleased:
There were a few other notes, mainly about fans and their reaction to the story on chat boards and social media. In particular, Frank looked at the Pace post by Rutgers who said he tried to contact both the state and NYRA. It's an interesting piece with some good reporting by Frank.

The social media aspect of this is something that certainly should not be overlooked. It's a different world now. 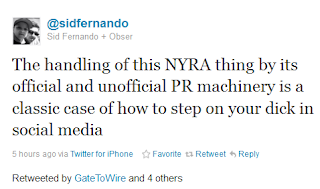 For the record, despite some arguable missteps with a tough story, if I had a track I would hire Dan Silver, NYRA's internet dude, in about a second. FWIW.

Thankfully there was a comedic element this afternoon (which is much needed as everyone surely doesn't like this story) and 0_crunk tweeted out the portion of the Angst story above that made me spit out my drink:
Yes, the word "chickenhead" was used in our trade press. I have two unnamed yearlings, who knows, maybe I found a name?

Chicken has been quite a prolific poster on Pace over the years and he is very sharp. I think he's in a tech startup in the Valley or something. He's an interesting guy and one of those people who when he is against your side of an argument, you usually go back to see if you haven't made a mistake.

Another dude who is usually good to listen to on betting issues is Scott Ferguson who runs sportsismadeforbetting, and has worked in the gambling industry overseas for some time now. I see he offered out (on twitter) a way for NYRA to help ease the pain of bettors not getting a fair shake - seeded pools. 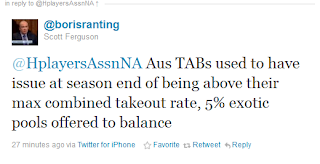 This is interesting to me, and yes, it is the way the TAB's do it. In Australia they used to have a takeout ceiling (still do I think) whereby only about 16% can be taken out of the pools (versus our 22% if you are wondering). But, sometimes there would be more taken out than prescribed by law; for example, if too many people played 20% pick 6's instead of low takeout place pools.  What they do then is seed pools and give the cash away.

One way is a Fat Quaddie, which I explained here way back in 2008.

Clearly a 0% rake bet like a Fat Quaddie is not doable here, but maybe they can come up with something.

Regardless, we've been asking New York to do more with their slots cash than just stuff it into purses like they did in Pennsylvania and Canada because when you ignore the demand side, there was no real handle growth. Maybe this will, in the long run, be a good thing for racing.

This is truly one of the more bizarre betting stories I have seen in quite some time.


at December 22, 2011
Email ThisBlogThis!Share to TwitterShare to FacebookShare to Pinterest