I saw a twinky from a stock market follower the other day when Tim Tebow was trending via the micro-blogger.

Today it showed its power and what it can do in promoting a racehorse. Rapid Redux - for most intents and purposes a 5 claimer - won his 21st in a row. He trended on twitter just before post time (and still is at this time). 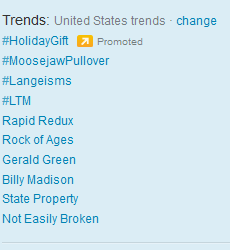 What's neat about that is if you click the trend hyperlink for Redux, it opens up a page which has new media associated with it. You can see pictures and videos of this lil' racehorse. 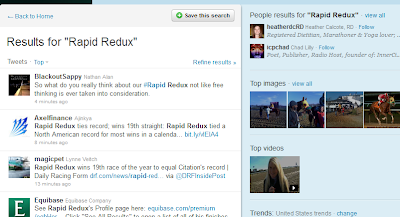 What we have are people who have no idea who Rapid Redux is. They click the trending link. They see pictures of him (some of them live pictures) and it introduces them to a racehorse.

The monetization of those clicks are a whole other story (hint - there are none right now), but for one brief period a good many people got to know a horse.

PS: We'll look at monetization of popular racehorse press and links this weekend in HRU.

at December 13, 2011
Email ThisBlogThis!Share to TwitterShare to FacebookShare to Pinterest