Someone Call the CFD; Balmoral Handle's on Fire

I got a note this morning from Balmoral Park regarding their year over year handle numbers. To say they're impressive would be an understatement (click to enlarge): 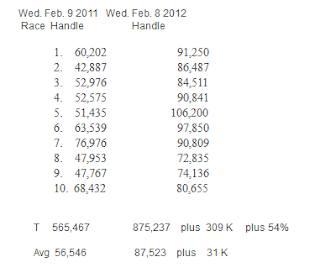 What happened? It seems a number of things. The track promoted their pick 4 takeout decrease in 2009/2010 to a willing audience, they worked hard to get noticed and up the bet, churn took over in some pools via that, and they joined the USTA Strategic Wagering Initiative which guaranteed some pools.

Most of all, in my opinion, it took time.

Short term thinking at its finest.

Currently, a couple of years later, Balmoral is doing $20k to $25k a night in their pick 4 pools. Overall handle, as you can see, has followed.

Churn, getting your name out there to willing players, promoting. It all takes time.

Balmoral stuck with it and they are now being rewarded. They, in my opinion, are a poster child for the patience that's needed to change our game for the better. One track at a time.
at February 09, 2012
Email ThisBlogThis!Share to TwitterShare to FacebookShare to Pinterest