Yesterday's Dan Patch Awards are complete. The full list of winners, and some quotes are here.

Each Dan Patch Awards I like to do a few things: Take a look to see if I knew someone that won, see how people I see at the track who usually muck stalls look in suits, and check to see how many pictures of winners feature Jerry Silva.

This year I got to watch the "Breakthrough Award" be given to Justin Horowitz, a twitter fave and friend to me and many of you as @itsthejho. I copy the press release of his big win below.

I'll have a bit more this week on the panels at the Harness Racing Congress. The crew at the USTA did a fine job assembling many good panelists.

Why does the status quo rule in racing? Because when pushback comes, it works. Mandate synthetic tracks in So Cal, get pushback, change. Try and lower takeout at a horsemen group and get pushback, fold. The Breeders Cup has reversed their ban on lasix for 2013. Some people are not happy about it, as witnessed by this board resignation.

What disturbs me most about racings unwillingness to change, is that when good hard working people put blood, sweat and tears behind something, only to see a reversal later on, it chips away at their passion. They sooner or later say "why bother" and move into the fold of picking up a paycheck and not ruffling too many feathers. Others see it too and say "forget it, why bother". When your industry stops caring, and becomes more and more dispassionate, it stagnates, and shrinks.

Here it is, as promised the JHO Press Release. Have a great Monday everyone!

It was one for the ages at the Dan Patch Awards as JHO won the Breakthrough Award.

Usually reserved for important people like a driver, this time a broadcaster got the nod. The host of Inside Harness Racing and left hand man of the left hand of Jason Settlemoir, who is the right hand man of Jeff Gural, JHO was thrilled with the win.

"I grew up on the mean streets of Chicago and I tell you man, I never thought I'd make it to reach this" said JHO.

Moving to Syracuse at a young age to be nearer to Vernon Downs, Joe Faraldo and the Syracuse State Fair, JHO took on studies at Syracuse University, where he majored in cheering for the Syracuse basketball team. 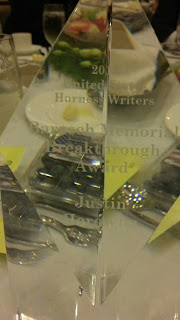 "I got a call from Carmello Anthony with a shout out. Alright Orange! Congrats are coming from everywhere. This is awesomer than a night at Tioga when we shoot tee shirts into a moving car." said JHO.

JHO has received other awards in the past, like when he won the Only Jewish Kid in America to Like Country Music nod at the Country Awards last year, but none nearly approach this milestone.

"For that one all I had to be was a fellow who listened to Florida Georgia Line. When I got a "Participant" award for little league at age seven, that really didn't take much. For this one I'm proud" said JHO

Other congratulations hit the wires when the news was broken, because no one really knew he got this award months ago.

"JHO rocks" said Lexington native Melissa Nolan. "If he comes to Lexington it will be bigger than the time Pyro came for the Blue Grass. The line up to the Liquor Barn for the party will be huge!"

"Congratulations to JHO" said Jeff Gural. "I'm not sure I've ever met you, because you are hundreds of rungs below me on the ladder, but congratulations anyway"

"He's in the sport of harness racing and he isn't a moron. Forget only this award, that's so rare they should make him King of Racing by default. Congrats, I guess" said 'Inside the Pylons'.

The USHWA would like to congratulate JHO and sincerely hopes he can get his cousin JLO to buy some harness horses and tell everyone about it in interviews.

From Pocket to JHO: Congrats.

at March 04, 2013
Email ThisBlogThis!Share to TwitterShare to FacebookShare to Pinterest

"When your industry stops caring, and becomes more and more dispassionate, it stagnates, and shrinks."

Very true! I love seeing workplaces in the TB breeding industry that go against this grain and encourage their staff to be passionate!