I got slagged by a Kentucky resident on twitter (who shall remain nameless) for not doing a blog today, so I will oblige. Happy Tuesday!

There was a blog post by a California owner today about owners who spend big bucks at horse sales, with regards to a recent California takeout hike.
Not really.

Owning racehorses, especially of a higher caliber in yearling sales, is not about a 10% purse hike, where a MCL race goes from a $22,000 to $24,000 purse. At the high end, return on investment is dismal, and will be dismal if purses were even $100,000 for a MSW. People at the very top buy horses as a hobby along with the thrill to win and attend big races (or cash a lotto ticket on a nice stud deal). They're not saying "no I will only go to $1.7 million on that two year old instead of $1.8 million, because claiming purses are down 4% at Golden Gate". If they bought these horses purely as a business, they'd never buy one in the first place.

Interestingly enough, even the $22k to $24k purse bumps, I feel, don't do very much for the business in real terms either. The purse increase, as we've seen in slots land, can get eaten up by vets and other suppliers raising their prices. In addition, that purse increase may only go to the top stables who win (and new partnerships who are created), while those at the bottom still trudge along. If the bottom end are struggling to win purses before the purse hike, they struggle after as the racing gets more top heavy, with the pursuit of win checks by big stables. And as an added disincentive, their costs go up too. I don't know, maybe they're even worse off.

It doesn't do much for bettors either. Claim and drop horses at 2-5 are in a lot of races at slot tracks with weird purse to claim price ratios, making more and more races unbettable.I don't know how one can maximize purse hikes to do more for the business of racing; I am not that smart. But to think they're the holy grail like some do, I believe, is not reality.

Great news tweeted out by an insider just now:

Joe Faraldo, who works in New York racing, wrote an article about New Jersey racing.  I found it rather odd, because I don't think I've ever seen inter-jurisdiction commentary ever done before in the business. Allan over at VFTRG took a look at the release. 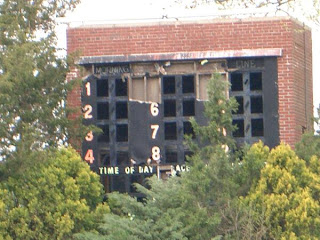 Nice article by Caton Bredar on jock changes. Fans look at them as the be all and end all, but most times it's just political, or a "feeling". I remember chatting with a trainer of a big stable who used a particular guy. It wasn't for any earth shattering reason, nor was it numbers based. He just said "I feel I have good luck with him".

Tom LaMarra posted this picture of the old Atlantic City tote board on twitter today. I replied that with horse's odds changing from the quarter pole to the three quarter pole nowadays, the picture is a metaphor.

There's an article about Frog Juice in an Oklahoma paper I found interesting.  People like to say detention barns do nothing to help, but noted in that article is that frog juice is given within six hours of post time, IV. Similarly, I have heard venom given underneath the skin is ineffective four hours or more out. Detention barns still make a difference, in my opinion.

Brian Nadeau on the Xpressbet blog took (what I thought was) a back-swipe at the Pletcher-type trainers out there. He wrote:
The Ontario Ombudsmen responded to the letters he's received about the Slots at Racetrack program. he investigated and found things were done correctly. If you read the comments section, people are saying it's a 'fix' and corruption.  The "fix" angle seems to grow, as the reality of the situation takes hold.

Good article about Dresden Raceway by Britt Kennedy on SC.

A lady on twitter named "Lady Longshot" was a staple to many on the medium if you liked horse racing. Most were informed this week that she passed away. She loved racing, was a pleasure to speak with and had a nice way about her.  She struggled with her disease with class and dignity and always looked forward to her next race, bet, or conversation. It's very sad to see her go. May her sweet soul rest in peace.


at March 19, 2013
Email ThisBlogThis!Share to TwitterShare to FacebookShare to Pinterest