Class drops are always something to deal with, especially in the age of the supertrainer. "Class Handicapper" who usually makes solid points, I thought did again.

"Unless you have trainer specific information, I think you are generally at a disadvantage to the insiders that know the horse's current condition.

Many years ago I was hot walker one summer at Aqu. The barn I worked for had a horse that won her last race by 7 lengths, but we were dropping her from 25K to 20K. Bettors were rightfully suspicious and only made her 2-1. But they were guessing, otherwise they would have made her either even money or 10-1. I knew she should be 10-1 and played against her with confidence. She staggered home.

We had other situations where I knew the horse was OK and likely to fire.
It can't possibly be that I was the only one smart enough to both read the DRF and use inside information about the condition of a horse when I had it to make bets where I would have an edge over the public.

So until this day, when all I have is my personal speculation, I feel like I can't make an odds line. I don't know if the appropriate odds are 1-1 or 10-1. So I don't bet unless I don't like the horse even if it fires its "A" race."

This is pretty interesting, and correct. Some class droppers are 10-1 or more fair odds, because sore horses who ran a 57 figure, will likely run a 37 figure - they don't win races. They aren't a 65% chance to win, they could be a 5% chance to win. That's a lot of variance.

We can do two things as handicappers: Ignore the race, or subset the data better by trainer. The former is easy, the latter is difficult at times.

I try my best to do the latter, though, because if you can pitch an odds on horse, you have a chance at a monster score.

One person I try to do this with is Jamie Ness. I noticed something that doesn't sit well with me for his drops, so I created a subset. I label it "Ness Negative Drop" and it shows up when I run my pp's. This is the model for 2012 so far: 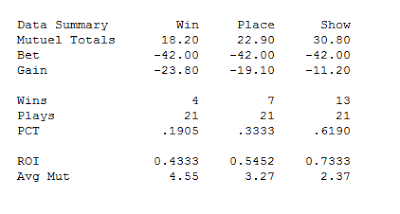 For a trainer that hits at a high percentage, that is worthwhile.

I also try and find positive class drops, and subset those by trainer as well. 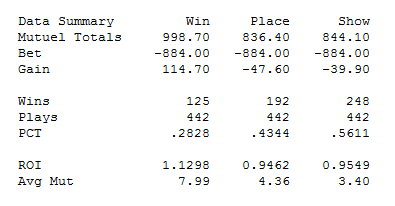 Not great, but not bad either.

Making money at racing is very difficult, but not impossible. I believe the only way to beat racing is betting horse's other people aren't. It does not mean pitching chalk and aiming high all the time. You need an unpublished edge.

Sometimes you can find one trainer only and it can help. Everyone can do it, with a little work. For example, maybe you notice David Jacobson drops a bunch of horses. Try and look at when they race super-hot, or when they are ice cold (finish position does not matter - just look at how they race, how well meant they are etc) and dive back into the PP's, work patterns or whatever, and see if a pattern emerges. Think of how profitable that can be.

This is probably my favorite part of horse racing - finding something that you can use, that others may not be using - even a computer team, or a rich whale. It's what makes the game very fun.

In HRU today another part of handicapping was looked at, but there is no solution for you and me at home: The Schooler. More and more trainers are using schooling races between starts to get their horse ready, but we have no idea when they take place, what the horse did or didn't do. The next time you see a horse win in 150 off a 156 qualifier three weeks ago, chances are he schooled in 54, maybe twice. We just had no idea.

We spoke about Pletcher's Derby record here last week, and I notice there was some chatter on the subject via Paceadvantage.com. Some folks on the thread make good points. The Toodster's record in all TC races, as well as the Breeders Cup is pretty poor, no matter how you slice it.


at March 02, 2013
Email ThisBlogThis!Share to TwitterShare to FacebookShare to Pinterest