Through a source I can’t name (OK, it was Cub Reporter), I got my hands on a new internal memo circulated through California racing this morning. As you know, there was a story in today’s LA Times, where two emails that referenced 1960’s sitcom “Hogan’s Heroes” caused quite a stir for the CHRB Chairman. With this turn of events, California Horse Racing has announced a new policy.

Although I have been warned this is top secret and I should not post it publicly, I accidentally hit "post" so it's too late now. Here it is:

MEMO: To Everyone in California Racing. New Email Policy Announced. Destroy After Reading

From this point forward any and all emails from any participants or employee or fan of California racing will not be allowed to reference any television show, movie, actor or actress, past or present, when corresponding with each other.

Here are some real world examples:

If Rafael Bejarano is fouled in a race and 'overacts' to ensure the stewards see the foul, this can no longer be referred to as an “Affleck”. This goes for all in-person or electronic correspondence. 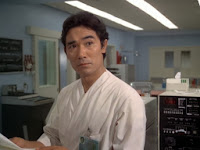 When the medical director catches someone with a high TC02 test, we can no longer say “he went Sam Fujiyama on his ass” in reference to the forensic genius in the 1980’s drama “Quincy M.E.”.  It’s just not right. Plus, I think the fellow who played Sam is Canadian, and this may anger horseplayers north of the border who like watching Quincy reruns. Or something.

We can no longer refer to TVG’s Todd Schrupp as the dude who looks like Hangover Part I, Part II and Part III and Part IV and Part V and Part VI actor, Ed Helms. I never really understood that one anyway, because I don't think he even looks like him.

For gosh sakes, even if you liked a Mel Gibson movie, don’t bring it up. Think, people!

Bo Derek can be referenced because she said it’s okay.

For those of you who have asked, yes we are working on a Trevor Denman policy. It is proposed that he no longer use his signature line “moving like a winner” as to not offend the horses who are losing. As well, “he’s about to sprout wings” will be eliminated so that horses who cannot fly don’t feel left out.

We live in a sensitive time, and as we all know, California teeters on the brink of insanity even on its best day, so let’s all be careful out there.

at September 30, 2013
Email ThisBlogThis!Share to TwitterShare to FacebookShare to Pinterest

Write on about the 0 takeout Pick 6 on Sundays.

Please, please, while you are working on the Trevor Denman policy, change the "And away they go" with his voice dropping, as if he is announcing at a wake. He is an accurate and enthusiastic announcer, but this phrase is the antithesis of what an exciting horse race, is all about.