Horse Racing Needs Reinvestment, Cultivation For Growth. It's More Than About a Pen

The national advertising numbers for the last seven days just came in. Sitting at number 4 is a gambling daily fantasy sports site. 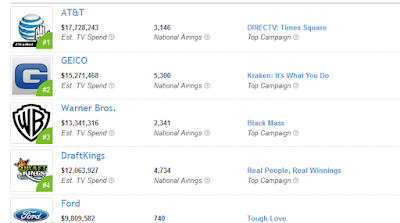 The $12 million spent is about 12% of this company's 2014 revenues. They are investing a lot of money to gain and keep critical mass, as they fight with competitors like FanDuel, and other gambling pursuits, like racing and poker.

Yesterday we looked similarly at Hong Kong horse racing, and specifically its handle and revenues since 2005-2006: 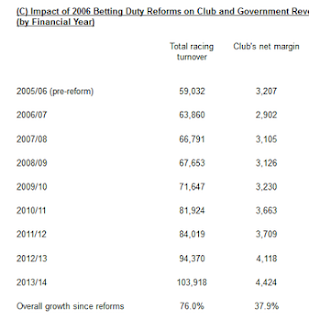 What this table shows is the Hong Kong Jockey Club's reinvestment in the customer base, not unlike what Draft Kings is doing. Handle, in 05/06 was about $59B in Hong Kong dollars, and that yielded $3.2B in revenue. Four years later handle increased to $67.6B, but if you check revenues, they went down, to $3.12B. There were no protests, nor were there groups upset about this, it was all part of a larger plan - to grow revenues long term through this reinvestment.

Five years later, handle was up to over $100B (a 76% growth) and all-important revenues were $4.42B, well above the amount just five years earlier.

Meanwhile, this is not happening in horse racing in North America, to any large degree. In terms of "marketing", in Canada at least, horse racing was estimated to spend 1.7% of revenues on "marketing", which is "in comparison to the huge dollars -- occasionally as high as 20% of revenue -- spent by casinos."

How about for bettors? With historical average cost pricing being attacked with the disruption of the internet, here is how "HPIBets.com", an ADW monopoly handles reinvestment in its customer base.

Further, via the 440 blog, regarding the microscopic player rewards:

"That's one of the biggest head scratchers in racing, to me. How can a customer worth about $110,000 in handle/year get barely any more respect than a customer worth $5,000 (or less.)? I'm not sure what a customer in racing has to do to be treated well by a track/ADW, but it seems to be quite a bit."

Ask a hundred people what horse racing's biggest customer problem is and you'll get a hundred answers, depending on the mix of letters in the fiefdom du jour. But, like survey's say from customers, it all hinges on disrespect. They are treated like lemons to squeeze, to serve the whims of a horsemen group or track; they are not invested in, to increase their churn, to better their lifetime value, to ensure they are betting this sport for years.

Draft Kings, the Hong Kong Jockey Club and others like them are trying, and in some cases succeeding. They are spending millions of dollars to increase the bet; to encourage and fuel their customer base.  Meanwhile, horse racing monopolies are giving out six figure players a pen. It's a big issue, and it will not go away until it's addressed.

at August 28, 2015
Email ThisBlogThis!Share to TwitterShare to FacebookShare to Pinterest

Does anyone in horseracing actually believe the game is a viable business? I doubt it. That is the reason why they don't invest. More importantly, this type of mentaility won't draw outside investors.