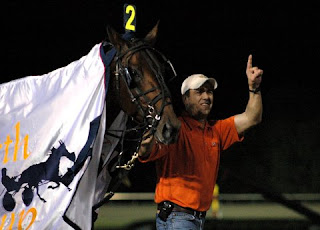 I had a look at the US Open results tonight to see Tiger Woods - on a bum knee - manage two eagles en route to the lead in the years second major championship. He simply outclasses a field, and we are lucky to be living in his era.

People can say what they want - everyone has an opinion - and rightfully so. But this horse is the most dominant animal this sport has ever seen.

The moment Brian Sears got stuck in the two hole, not prompting a pace, this race was in the books. It was not long ago that a 54.4 first half was considered fast, and a push. We were not sure if a three year old colt could come home quick enough to withstand the backfield off a half like that. With this horse it is academic. A 54.1 back kicker under a hand ride is all that is needed. No one can get close to this horse. It was over at the quarter.

I think we may see this horse go 145 and change at the Red Mile this year. I hope he does it. He is harness racing. He is owned by small timers, trained by a small timer, he himself as a $40,000 yearling is a small timer. In our sport anyone can own or train a champion. And sometimes that champion can be more than that - he can be astonishing. Somebeach is that horse. I am happy I got to see him race, and feel darn lucky every time I get to.

Congrats to everyone on a good Cup night, and a wonderful victory for the connections and for harness racing. It was astonishing.
at June 15, 2008
Email ThisBlogThis!Share to TwitterShare to FacebookShare to Pinterest

I went live tonight to Mohawk to see SBSW go, he is just a monster, the crowd was clapping and cheering in the post parade and when the race was 7/8's over and he was going to romp the crowd went wild!!! I was glad to see a HUGE turnout, the weather co-operated, and a great time was had by all.

I agree. It was really nice to see. I have never ever seen the crowd start cheering at the three quarter pole in a harness race, when the horse looked like he had to be struck by lightning to lose.

I posted that Secretariat video a few posts ago with people cheering him down the lane. It was strangely similar, imo.

He still needs to prove more to be equal to Niatross, but so far, he shows the potential. I am rooting for him.

He looked impressive on the computer from Twinspires. Closeups as he went the last 8th showed how strong he is. Congrats.

He's awesome. He might cause me to make the 2 hour trip to the Big M for the Pace.

Yesterday I felt grateful to be able to watch Tiger Woods play golf in his prime and this horse pace his way around the track. Awesome performances by both, the likes of which we might not see for a long time once they are gone.

SBSW isn't Niatross, not even close, he is a monster, that is going to be mangaed to make very few starts and maximize his potential. I am sure alot of this is done because he is not a very sound horse, I don't think you will see him at the jug, but for sure he will go to Lexington for the speed show!!!

Go see the "Elitlopp" and you will see and hear the crowd screaming all the racrs, all the time. It is fantastic!

When Tyler Buter was riding in Michigan I never thought of him as a young phenom. I watched Art Official's two races at Meadowlands and in first I thought he was poorly handled at the start and in the 2nd just ok. Last night Mark M started just inside of him with an inferior horse and got 4th. Mark M also put up a nice ride to win the trot. Have you ever seen Buter on a spectacular ride?

You are comparing apples and oranges, MM drives alot of point and click speed horses for high % trainers, TB will get his shot, he is a upandcomer for sure, he will hit the spotlight in the next few years.

I think Art is a different horse when taken from off the pace. At the M he was not, so I think that had most to do with the performances there, not Ty.

He drove for us at Windsor several times and was professional. Sometimes we forget that they do not carry a horse across the finish line, they just sit behind them. From what I have seen, if Ty has the horsepower he can win within plus or minus a point from other pro drivers.

Mark is pretty awesome tho, and imo the best under thirty driver out there. Again, the difference might only be one win out of 100, but regardless, he is pretty dang good, imo.

Didn't see even a paragraph in the Detroit papers Sunday. Out of curiosity I searched the NY Times, Washington Post, Chicago Tribune, Lexington and Louisville papers and found nothing. Also nothing in the Vancouver paper. Nothing in the Windsor Star. Is there no one trying to give racing a boost. Somebody has to be bombarding the press with SOMEBEACHSOMEWHERE. I go back to the 40s following racing and it is very sad to see the current state of the sport. Somebody has to pick up the ball. At least he is on Youtube.