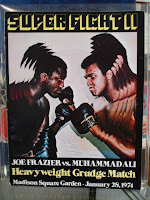 When the USTA ran a poll after the Meadowlands Pace they asked who would win a rematch between these two steeds. About 85% of the people said Somebeachsomewhere.

This was not surprising. the Beach defeated Art a few times before, in stunning fashion and lost the Meadowlands Pace Final after a brutal trip. However, handicappers I would submit thought differently. Art seemed to be a horse learning how to cajole his speed, and he finally learned to capitalize on that. In yesterdays Cane Pace elimination he showed he is all business, as he paced a track record at Freehold.

We saw some of the differences in what the public thinks about Art in the early betting. Moon Beam opened the favourite, and Art had trouble busting through even money. Contrast this to the Beach who opens his races at 1-9 and stays there. In a match race between the two, I would say the public makes Beach a pretty overwhelming favourite. But I think the value would lie with Art. He is a marvelous horse, and his fast Meadowlands Pace win was no fluke, just like his 52 back half in May in the Burlington stakes was no fluke.

The thing with Art vs. Beach that sticks with some is the post parade appearance. Beach is a big strong, strapping horse. Art does not look the part. He has those knee boots, or maybe it is tape, he is a little smaller and less of a presence. But one thing we all learn in racing is appearance is for losing handicappers. Some of the best looking 300k yearlings could not hold a candle in a race to some others who are somewhat infirm. This has happened throughout history.

So where should they meet? Most want them to meet in the Jug. I understand that, but to me this would be pointless in terms of looking for a fair battle. If AO wins his elim, and Beach the other, we are left to a post draw to decide who gets the rail. If Art gets the rail, Beach will either be 1) hung the mile by Pierce or 2) In behind him, boxed. If Beach gets the rail the opposite happens. It is luck.

I think the Red Mile should be the place, if they both stay sharp. It would be fair and it would be exciting.

Although I am a fan of both horses, in fact I think in my betting this year on the blog I bet Art in both the Cup and the Meadowlands Pace, and you know how I feel about Beach, but I think Beach is a slightly better horse. People are still arguing who had the tougher go of it in the Meadowlands Pace. Sometimes we look at things too deeply when analyzing a race, when all we need is the racelines. Who went the tougher trip? Well here are the two lines. If you owned a horse, any horse, which trip do you hope your horse gets?

Clearly I would want the horse who had rail control and the two hole trip just past the half.

So here we have the tale of the tape; I would make Beach 4-5 and Art about 7-5. They are two extremely fast three year olds. Probably the two best three year olds we have seen in a generation. I hope they meet again, and I hope it is at Lexington.
at August 24, 2008
Email ThisBlogThis!Share to TwitterShare to FacebookShare to Pinterest

...."But one thing we all learn in racing is appearance is for losing handicappers...."

It is surprising that a handicapper like you would make such a fatuitous and erroneous statement. Your statement SHOULD HAVE BEEN, "Only losing handicappers neglect to employ body language in their handicapping".

As one who makes "final" betting decisions only after visual inspection of the post parade and warm-ups, I can say, with absolute confidence, that I can outperform any particular handicapper who bets without such inspection.

My positive results speak for themselves. Hence I would appreciate if you would not make such MISLEADING blanket statements.(On the other hand, the less people so involved, the better odds for those of us who do).

I use physical handicapping and it is important. I am speaking of a pristine individual with racelines, racing another individual with less than stellar size or confirmation. There have been many 149 pacers who went thru the ring at 10k without the looks of a $400k yearling, who blow the doors off horses that are pristine. That was my point.

Art Official makes a nice pre race appearance in terms of soundness, but he is not a show horse. Nowhere near that.

I may have jumped the gun in my earlier post. Most happy you agree that visual inspection is important.

By the way, enjoy reading your blog, as your comments are always quite astute.

Thanks for reading Anon. And your comment. I have been a big fan of watching horses (especially trotters) on the track. Every time I see a horse book for sale which deals only with physicality, I scoop it up.

By the way, the whole 'I wont bet the horse if he is small' or whatever comes from a few folks I remember. One fella would not bet Doonbeg for about a year, despite him winning with last quarters in 26, because he was 'too small'. It never ceases to amaze me.

Another horse that was a bit black-balled like that early was Bettors Delight, who was not very big and strong looking.

There are a couple of people speaking like that of Art Official. 147 and a world record holder says differently!

I posted here once that I was surprised to see Tyler Buter getting the ride on Art Official. Thought he looked bad the 5th race back. Now he has a 4 race win streak with Pierce, Anderson and young Seekman. I think Pierce gets the most out of him.
Pre-race warmups? I've got doubles going with Air McNair on Extreme night at GeoD. The commentator is making his picks and to quote him "I was going to pick Air McNair but in watching him he can't handle the track so I'm going with ???" Air runs the race of the night and the most entertaining harness race I've watched in a long time.
RG

To Anon 9:01....yes Visual inspection can lead one astray, if the one doing the inspecting is not dedicated to the art. The best bets occur when a horse's appearance and attitude CHANGES from his previous outings. To know that one must follow his circuit. The art of inspection is so difficult that even after 30 years I still make errors

Your case of Air Mcnair shows that visual inspection by neophytes can be dangerous.