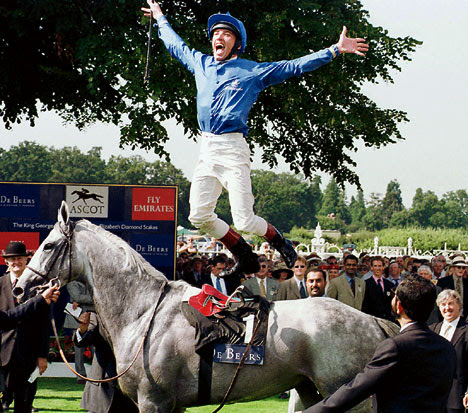 Mark Hetherman discussed a topic today in his blog piece, which is always good for debate. In effect, the question: Why don't drivers show more emotion after a win?

I am always amazed at the difference between jockey's and drivers in this respect. I watch Hollywood Park sometimes and when a jock wins a race he is usually pretty pumped. The winners circle looks like a party, with hugs and high fives. When the jock goes to weigh out, the scales dude always has a big smile and pats the jock on the back or gives him a high five and the jock is equally happy to receive it. The sceen shot ends usually with the jock looking at the camera and giving viewers a big thumbs up.

At Mohawk conversely, the winners circle tends to look like a gathering of people comforting someone who just lost their dog. There is a smile, but it is virtually silent. The drivers are speaking to the trainer, getting grilled on how the horse performed, and there is usually a complete disconnect from the fans.

I was at Mohawk last weekend, and after an adept steer and win, Randy Waples brought the horse to the winners circle. As he was walking back, I said jokingly "you still got it Waples" (I chat with Randy so it was not like I was a drunk fan who just lost my shirt on him and was yelling at him or something), so he did what he usually does - flashes a smile, says hi and thanks, and moves on. This is very rare, however. It is pretty much the opposite of the Hollywood race aftermath most times, with the driver walking away (on the side of the horse which shields him from fans).

As for showing emotion after a win on track, I think there is nothing wrong with that either, unless it is ridiculously over the top. A fist pump is seen often in thoroughbred racing. Overseas when a horse wins a big race in trotting, the driver usually lets out a huge yelp and waves his whip around like he is a child who just won King of the Mountain. Why not, he took care of his horse all week for this, he drove the horse well, he has beaming owners happier than heck in the winners circle waiting for him. He should be happy he won.

In harness racing we rarely see this at all. I remember a few weeks ago, Phil Hudon was in the lead and he was working on his horse, giving it his all for the win. When a horse went by him late, he dropped his head in a shrug, showing he was completely pissed that he lost. I liked that. Not only does it tell me he tried, it puts a face on a game where the public at times (whenever a horse loses) tends to yell "he stiffed him; this game is crooked." It's not crooked, and by showing one is happy with a win and mad at a loss it helps illustrate that these guys are as mad or happy as a bettor is with the result.

I hope we see more of what we see in thoroughbred racing on the harness side. Show you are happy with a win and sad with a loss. If you do it in a class way, which shows your happiness, but does not denigrate your opponents, it can be a wonderful thing for the sport.
at July 21, 2009
Email ThisBlogThis!Share to TwitterShare to FacebookShare to Pinterest

My personal all time favourite is the emphatic head shake when a guy comes first over when he shouldn't.
Little Nicky gave one about a month ago, was on the floor in tears laughing.
Isaac Waxman was pretty emotional when he first started training....fist pumps and jumping up and down was very commonplace in the Flammy winners circle whether it be a 4500 claimer or the open.
As far as the winners circle goes at Mohawk, if I see one more freaking guy holding the horse with a cig hanging from his lip, I swear I will throw a rock at his face!
You know who you are scruffmaster2000!
Show some respect to the horse man...if it wasn't for him/her you wouldn't have a job!
Sorry about the smoking rant, just really bothers me.
Carry on! :)

I couldn't believe the lack of enthusiasm from the connections of Well Said when he won the North America Cup. His owners, trainer, and driver just stood there like it was no big deal, and the afterace interview was just as bad. The guy interviewing was more excited about the win then the owner/trainer. If I were Pepsi, I'd be a little peeved at the fact that they didn't even thank Pepsi for sponsoring the race. And could they try and dress up a bit for the race. Geez, at least look like you didn't just roll out of bed! :)

I suspect the reason why you get no reaction is traditionally the driver was a trainer and even though that race was over, they had to get back to the paddock to warm up a horse in a latter race; there was no time for horse play (pardon the pun).

That being said, a little more emotion would not hurt anyone.

It is hard to smile when one is thinking this:)

I agree that a little more emotion would be fine in the winner's circle, and a little more polish in the interview-contrast the speaking ability of so many top jockeys with the inarticulate ramblings or muteness of all but the Campbells, Dave Millers and a couple more.
Twenty years ago, at Harrington (Del), I was standing at the rail watching a close finish. One of the drivers, who I think was named Dave Buckson (and I think he was the state Atty. General at the time), asked ME if he had won the photo. I told him I thought so, and when the numbers were posted, his was indeed the winner.