We have chatted a lot about CRM here in the past, and for your average every day fan who might want to become a customer, it is super-important. But what about the casual observer, is there hope to try and hook them into the business of racing?

One avenue I think helps, is the future pool wagering for the Derby. This wager as we all know is interesting for fans, because they are pre-qualified already to play futures. Your average sports fan makes a trip to Vegas and can bet the winner of the NCAA's, or the Stanley Cup. It is a part of our culture as sports bettors. And it has to up viewership.

Right now I commend Churchill with their Derby pool. They have promoted it and made it something fun. Technically it should be treated as a loss leader, because it markets your event for you.

Is this good enough? I think in ten years, this wager will be much different than today, and I think it will help racing because big events drive casual fans, and giving casual fans more ways and better ways to participate and share their experiences, is what we're after.

There are a few problems with the Future Pool. All horses are not represented, the odds lack a true real time feel, and you can not change your bets after they are made. This is something that the "World Sports Exchange" tackled as far back as 1997, and it changed the market forever.

What can a "Derby Exchange" for betting do? Quite a bit.

First, it can allow you to trade your position. If you have an eye for horses, or pedigree, and you find a nice horse off of a bad line, the sky is the limit. Let's look at the Grand National at Betfair for an example:

There is about $500k traded already in this market and it is a tight one. Let's look at the trading on the current chalk. 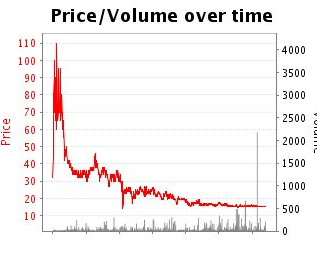 You could have bet this horse at over 100-1 earlier in the season. You could be trading the horse out right now at a profit. An example for the Derby might be: What if you bet $200 on Uncle Mo before the BC Juvenile last November at 12-1? You could easily trade him out at 4-1 and lock in profit. In addition, this ups volume as a rule. If you could bet Uncle Mo, knowing you could trade him out later, you might bet $20 instead of $2, or $500 instead of $50.

The second thing it might do is glue the casual observer to the news. If you owned Eskandreya last season at 10-1 and he was 4-1 two weeks before the Derby, would you not be paying attention to what the news is? If you heard a good work report on a longshot would you not pay attention? With a huge market and a chance to make some money and have some fun, people will pay attention. There is a 45 year old mom in Ohio who has a real time ticker on her Iphone for INTC news, because she is wondering if she should sell her position. It is not a stretch to imagine a sports bettor having real-time Derby news on her Iphone. Money talks.

The third thing it clearly does is attract a new participant in our sport. Peter Webb never played a horse race in his life before wanting to "trade" such positions. There are people writing naked puts, buying corn futures, or using Black-Scholes like we use Formulator who may be interested.

Fourth, forget cannibalization, and think growth. If thousands of people are paying attention and trading positions, think of what Derby Day can do. If you are that in tune with the horses, you better believe you are going to take a poke at an ex, super, or pick three.

Last but not least we have the existing fan base. There are literally thousands of people out there who would book Uncle Mo at 2-1 nine or ten weeks out (clearly 2-1 is an absurd value bet). All they can do now is wish, not play.

The Grand National will have well over $15 million bet on it via this trading medium. I think in ten years, if legal in the US, run by whomever, $15M can be chump change. The Derby, the social media explosion and the ability to attract tons of new folks to trade this, is a match made perfectly for our sport.

Note: Who is a bust in the Future Pool? Who's a Bargain? Here is one opinion.
at February 20, 2011
Email ThisBlogThis!Share to TwitterShare to FacebookShare to Pinterest

Nice post. This year the "handle" looks up about 15 percent the highest since 2005. If you just added 20 more horses this would allow for 400 more exacta combinations. We don't need all 364 horses nominated because half those horses haven't run nobody is going to bet them anyways. But 20 more horses makes Uncle Mo maybe 8/1 and Dialed In 20/1 Allows some of the next 10 contenders to go off at 100/1 or so. The pool would double if just 20 more horses could be bet on.

Even if you have 20 more horses you still have a limited number on quality. I believe you will just see many more extreme longshots. Its hard not to bet a 2 year old that runs a 108 beyer figure in the bc juvenile. that is unheard of this day and age.

If they did this correctly and paid for the sunk costs and drove all revenue back into marketing & it grows..... would we expect the usual to occur, i.e. a fight over profits, and the future will be killed?

It's what happens more often than not.

There are so many problems with the current wagering format of this bet it is a joke. First and foremost, why would anyone bet on a horse in Saturday, prior to the pool closing, before it runs? Obviously, only complete idiots. If they closed the pools prior to the Saturday preps their handle would go way up. I brought this up to a still current Churchill executive when the bet was first offered and he told me I was "preaching to the choir". Apparently the powers that be would rather cater to the uninformed guy betting $2 on a Thursday on or against a horse in on Saturday (when he could wait) and chase away the people who would bet $500 or more if they could lock in their price prior to the Saturday preps.

Brian, complete idiots might describe someone who bets a day before a Derby Future pool closes, if you think a person who bets without knowing what his or her return is a complete idiot. I think that description then would also apply to trifecta and super players, and pick 3,4 and 6 players as well, no?

Assuming you are talking about Betfair as the Exchange, they could be out of business by then. A crucial decision will be made in Australia on March 11 which will be crucial to the global racing industry and maybe online gambling as a whole. I'm all for innovative new ways to capture the punter's imagination and promote the sport but they must pay a fair price for the product.