There were a few items in the news today and a couple caught my eye. In general, the thought was about how we need to get moving.

In 2006 Hong Kong racing was experiencing it's sixth straight year of revenue declines. The newly appointed betting guru there decided that they had to move on these losses. The Macau casino's had been attracting gamblers and rebated offshore action was also adding a pari-mutuel pool leak. Bobby Chang, when presenting to a conference in Paris noted that when horseplayers stop betting a venue, they are very difficult to get back. He had to do something, and quickly.

What Mr. Chang decided to do was attack some of those losses regarding pricing, with rebate. The effective takeout rate was lowered to 17.1% blended (15% on rebated action), which is pretty good for a quasi-monopoly to get people back playing. The results were apparent immediately (pdf). 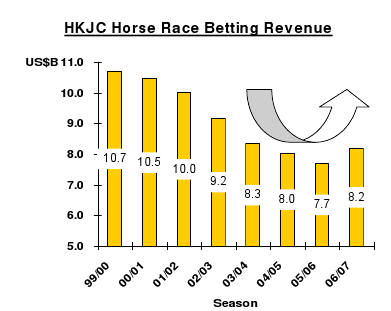 The terrible trend line was stemmed, which is difficult to do. This has improved, despite the world-wide recession since 2008, which the racing industry here blames the declines on. In 2009-2010, revenue was a little over $9B.

I admire this structure and its alacrity. We all know as horseplayers when we leave something for something else, whether it be a track or another game, we are very hard to get back. In Hong Kong, with a gambling person in power, with a proper structure (there are not fifty-seven acronyms there fighting for money), this could be done in virtually one year. Purses will come if people are betting.

Over here two items that caught my eye today exemplified the differences.

First, Jack Shinar wrote about the takeout increase and resulting Players Boycott in California. Handle is off close to $18 million so far this meet, yet reading the article there is no sense of alarm or emergency like we saw in Hong Kong in 2006. The only thing spoken about is a takeout reduction for on-track participants - which we all know is not targeted, as on-track patrons are the least sensitive to rate changes. There is no talk of the real issues like super-high signal fees, decreased churn, poor races, increased juice and more. There is no sense that anyone there wants to get things rolling by making lemonade instead of squeezing dry lemons for more.

Second, via r2 there was a Yahoo! piece about Las Vegas and Cantor-Fitzgerald's new system for in-running betting, via an IPAD, smart phone or tablet. This is a de-facto betfair for sports bettors in that state. Next time when you or I visit Sin City, we will not be sitting there betting a game line at a crowded book. We will be betting on live in-play betting, just like Betfair offers.

In contrast, we in racing are looking at Betfair in Jersey, hoping it can get going. In California, where it probably could be up and running right now, it was sloughed off for a decision in 2012 due to horsemen, Magna and CDI opposition.

In Hong Kong and Las Vegas they make things happen. In North American racing we argue about them.
at February 03, 2011
Email ThisBlogThis!Share to TwitterShare to FacebookShare to Pinterest