Yesterday it was announced that Rod Phillips has stepped down as CEO of the Ontario Lottery and Gaming Corp. 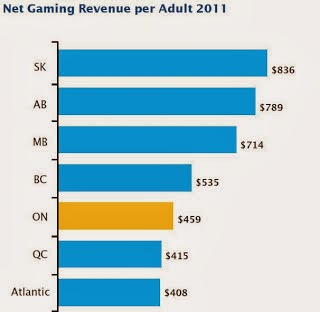 Phillips was in charge of the modernization plan to increase per capita gambling revenue in the Province, where it lagged behind several other jurisdictions with gaming. That plan - to proliferate online gaming, more and bigger casinos and otherwise - was lauded by government insiders as a way to bridge the deficit and fund government initiatives.

However, so far it has failed to resonate (we surmised this might be happening last year). Casino votes in Toronto and Vaughn, for example, were not exactly pro-casino. It is reported in the piece that other municipalities will be looking at it. I guess there are some cities out there who will want a casino, but they probably won't be where the government wants them to be, to ensure max revenues.

What is going ahead with the OLG, is the amalgamation between it and horse racing; proposed in the initial brief almost two years ago. This amalgamation, and the resulting funding announced late last year, looks to provide racing with some sound footing to build upon.

If this softening of expanded gaming continues, either with this government or the next one, this could be a real boon for horse racing in the province.
What does the above mean?

It may mean that horse racing has a future in the Province.

No there won't be 18 racetracks; or racing for the sake of racing, or slot machines back at the track with 10% going to purses and profits - in today's day and age that's just never going to happen. But there will be revenue, there will be opportunity. Racing is already in the gambling fabric of Ontario, and with fewer and fewer Queen's Park foot soldiers to enact a massive expansion the public does not want, it's probably a good place to be.

at January 23, 2014
Email ThisBlogThis!Share to TwitterShare to FacebookShare to Pinterest

Thanks for the astute summary. Clearly Woodbine is "on the bit" for a destination casino. Toronto council opposes such a development, but this can be easily overcome by the Province. Simply expropriate the land Woodbine sits on, thus removing it from Toronto's jurisdiction. For this to happen we need a Premier with "balls". For those in the know, its quite clear Kathleen Wynne qualifies

Horse racing in Ontario is getting around $210 million a year over the next few years (rent included). It isn't $360 million, but it is still tied into slots, and when push comes to shove, it just represents a smaller percentage than it used to regardless of where it is coming from. To me, I don't see how if slots for racing was a bad thing on one hand, and poker, or expanded casino gambling or sports betting(all having nothing to do with horse betting) is OK to draw a percentage from. All these are really just slots all over again. However, I'm of the mindset that since the public seems to only be OK with casinos at racetracks, racetracks should get a percentage of the action.
Of course, it is different case if horse racing gets a chunk of a racing lottery or Instant Racing in the future. Horse racing should get the bulk of the net revenues regardless. I do agree that racing's future in Ontario looks a lot brighter now than it did a year ago, and I'm not quite sure that the days of slots revenues being directly tied to purses and tracks is a done deal yet.

There will never be deals at 18 tracks again, with tracks and horsemen controlling any of the money at those tracks. That split caused all the problems in the first place, and was a horrible waste