Playing With Stats Is Fun, Sometimes

Playing with stats can be interesting, no matter what we do, but these stats always have to be looked at through some sort of statistically significant lens.

The NFL playoffs are upon us, and the airwaves are filled with narratives. This weekend, the Peyton Manning versus Tom Brady story is one of them, when the Manning led Broncos meet the Brady led Patriots at Mile High Sports Authority Field in Denver. (I always find curious the who versus who in football, because the two players never actually play against each other, like say one of those MMA fighters do.  Anyhoo, I digress.)

Manning has won 4 of 14 matchups and Tom has won 10 of them. That's the big story in the media. But what if we looked at the last decade, and only examined home records? Well, you'd find out that only three of those games were played on Manning's home turf, and he's "won" two of them. Maybe we can start a new narrative? Tom Brady is 1 and 2 on the road against Peyton Manning over the last decade. Yippee, that's solved. Let's see if it catches on.

You can do a lot with stats, but most of the time stats are meaningless if not used in some sort of context, or with causality. This was the major point made by Barry Meadow in last month's Handicapping Monthly. Give it a read if you are interested.

One set of stats I do like to lean on for broad generalizations, are those which fly in the face of long-held handicapping logic. One of those, in harness racing, is layoffs.

Talk to any old timer, read a handicapping book, or head to the OTB and ask an opinion on a layoff horse. Time and time again you'll hear "he'll be short", or "she'll need one". For some trainers that's true, but for others, you are costing yourself money. In today's day and age, layoffs of thirty days or more are much different than the old days.

At the Meadowlands trainers like Burke, Takter, and Julie Miller win with these types with regularity, equalling their regular starts hit rate. Betting them brings in more ROI though. Julie Miller has a whopping 22% ROI over the last four years with those types, for example. Mark Ford is sneaky good with these too, yielding a positive ROI.

Overall, long layoffs might be Manning versus Brady, or whatever media narrative you want to assign them. But subsets of those can be profitable and underbet.

Harness racing does not use stats much in their programs, or as a rule, and to find them you have to dig a little bit. When something is not used as much as it should be, or is available to everyone, there could be some gold in those hills.

7 Days of @itstheJHO fashion pictures on PTP's Blog ® continues today with this: 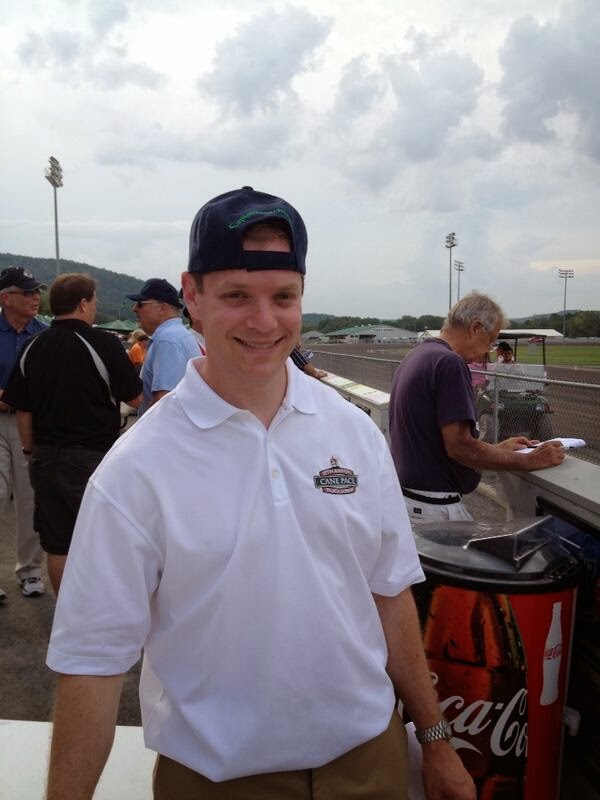 Justin is sporting a backwards hat, like Tony Romo. He is also wearing a pair of knit khakis and a (tailored) Cane Pace golf shirt. You can't see his shoes, but they are probably Armani's, made for him in Southern Italy, purchased on one of his many trips to Europe, where he likes to spend his time hob-knobbing with the stars, and eating Italian.

You can see Justin each weekend at the Meadowlands, talking to patrons, offering marketing and handicapping tips, and standing beside people like this, making them look fashion challenged.

Have a great day everyone!

at January 13, 2014
Email ThisBlogThis!Share to TwitterShare to FacebookShare to Pinterest