Today's social media tip: Use #BostonMarket on twitter when wanting to promote something. Example: The Sunshine Millions is today #horseracing #Gulfstream #BostonMarket . Or, I once visited a #Bostonmarket to mull breeding my mare to the best ever, #WesternIdeal. Or, visit the Paulick Report. #DRFPlusstinks #Cummings. #BostonMarket. Landers might want to see a story on an NFL tight end getting lost and doing something that Larry Collmus talks about, but screw em; it's dog eat dog for traffic out there.

Money for aged horses is pretty bad, when compared to that of the glamor division. Slowly that's changing a little bit, and the Quebec Jockey Club threw their hat in the ring with a $200,000 Prix d'Ete for four year old pacers only. If you want the Captain at your track, this is a good way to do it.

Bill Finley writes "If Alex Rodriguez was a horse trainer".

Breeders Cup dude, fashion-man, and all-around-nice-fellow, Peter Rotondo is a part of the upcoming "Horseplayers" reality show on Esquire. He spoke with Bacon this week about the show.


Superstar pacer and breeding powerhouse Cam Fella, has been nominated for the Canadian Sports Hall of Fame. He has a lot of similarities to Northern Dancer and he should certainly be there. Fans are encouraged to use #CamFella2014 on twitter and comment on the piece above. Here's Cam coming back on to beat It's Fritz, back in the day. This race was hyped quite a bit and added to Cam's legend.


That race above fascinates me on many counts and I got to thinking about it, and other big races this week. On Tuesday I watched a replay of the 2006 AFC Championship where New England played Indy for the right to go to the big game. It was a fantastic game, and NFL Films (like NFL Films does) illustrated it beautifully with interviews and strategy thoughts.

One part of it, where Indy was down by 3 with about two minutes to go was incredibly interesting. They interviewed Peyton Manning and he shared the play calls and what everyone was thinking. At times people think the NFL is a high tech game, where everything is managed to the letter. Manning proved this wrong, talking about how he chose plays during the last drive, like "Marvin thought we should run", or "Reggie said he can beat him on an out, so we called that", or "Fletcher always thinks he can beat someone, so he asks me for an out and and up; he cuts it up at five yards instead of ten and I almost throw a pick".

If harness racing had a commissioner, or some slot money set aside for such things, a harness racing films of the Cam Fella-It's Fritz event would be a great watch, in my opinion. Why the brush and crush? What were the fans thinking? All of those questions in a filmed event would be great.

7 Days of @itstheJHO Fashion Pictures on PTP's Blog ® continues today, for day five, with this: 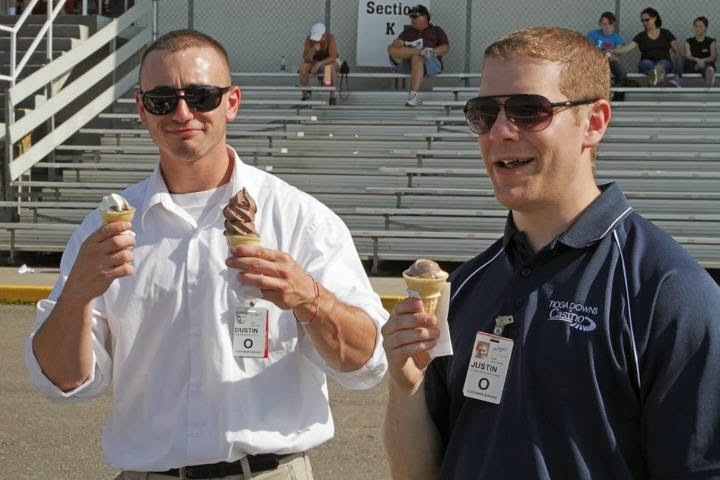 Here's Justin with a guy who I think is named Dustin who likes having two ice-cream cones at a time.

Justin is sporting sunglasses worth more than the GDP of Chad, and a knit Tioga Downs golf shirt, made especially for him in a "little shop in the garment district of Binghamton, where they know me".

The five people in the stands in section K were all looking to the right because a streaker was running across the track exactly the time this picture was snapped. If there was no streaker, the crowd would be staring at JHO.

JHO can be seen at the Meadowlands each weekend, providing tips on looking good and personal grooming. He also might handicap a race or two.

Have a great Friday everyone!


at January 17, 2014
Email ThisBlogThis!Share to TwitterShare to FacebookShare to Pinterest