$500 Million is Hard for Old-Time Racing to Fathom 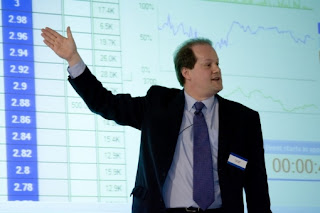 We have spoken about exchange wagering here for years, and with the topic becoming more and more prevalent in the US, we have read a good deal of hyperbole. Just like in Australia, where for years the old tote (pari-mutuel market) dominated, and permeated all parts of racings decision making, the view on new ways to do things have always been lampooned, demonized or deemed worthy of stopping.

Racing is infiltrated with the classic business demise: "If I don't like to do it, why would anyone?"

Since exchange wagering was passed, it turns out in horse racing betting the opposite has occurred, namely: If I don't like to do it, someone out there probably does, and they are betting their asses off"

Case in point: Peter Webb. He was a computer exec in 2003 where he discovered horse racing. Not like you and I did, but like a modern bettor does - through an exchange. Not long after, he quit his job to concentrate on our sport, and bet it. He bets horses from about 2PM to 2AM - races right across the globe. He finds the most opportunity from horses:

“When I looked at Betfair all I could see was opportunity,” he says. “I dabbled around on several markets, and with several strategies. Horse racing stood out because of the amount of money that went through it"

And unlike what we read from old-time racing here (it's hard to learn, you need to own handicapping books, study everything, spend years and years being a loser before you can win) he knew nothing about the sport.

“My lack of knowledge has really helped. I'm looking at the price of a horse and estimate where the price will go. My role in the market is as an arbiter of value and whatever I do I do before the race starts – I don't believe I'm better at predicting the form than anyone else.”

Peter bets up to $50k per race and plays as many races as he can a day. His trading edge, is his edge. It is estimated he bets over $500 million US a year.

Peter has some advice for old time horse racing:

"My recommendation to incumbents therefore is that they should accept that exchanges are here to stay and their future customers are already heavy users. Those territories or incumbents that feel ‘under threat’ are better off integrating the exchange model somehow in their models; at least you get the chance to do that now on your terms. To fail to do so will only hand the existing players an even bigger hand in the future of your business, whether you like it or not. Yes it means making some difficult decisions, but tough decisions now will lead to easier ones in the future. It is better to embrace change now and lose a little momentum for a better return later, than hand that advantage wholesale to somebody else further down the line. In life, you should only ever regret the things you didn’t do."
at December 06, 2010
Email ThisBlogThis!Share to TwitterShare to FacebookShare to Pinterest

That's ok, fair question. OSAS (ontario standardbred adoption society) is listed at the side with a banner that I put up (non-paying, I just put it up because I support them). The ads rotating at the top are part of the HRF network.

I support both OSAS and Paula Campbell's group in Jersey.

Thanks for posting this. I have been a vocal advocate for exchange wagering in the U.S. for some time, and Peter expresses the essence of the issue with great pungency.

500 million?
i have a bridge in brooklyn i can sell you.

I agree the total seems inflated. If he were to gamble $500 million, he would have to bet 6 days a week and bet $50k per race on 33 races per day. Doesn't seem like a winning scenario.

It is a different game he is playing. $500 mil is not at all unfathomable. I would be surprised if it is not underinflated.