Pompano - A Little Track That Leads 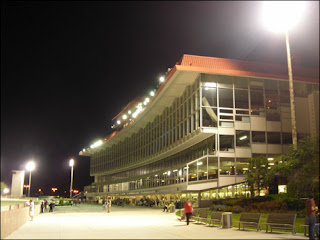 Sometimes we have to look small to see big. In a lot of industry's the smaller ones (who are forced to do things to keep afloat or die) make changes the big ones should make first. It looks like Pompano Park is one of them.

The small Florida track, where handles were small, decided it was time to focus on one thing and one thing only - the customer.

Harness racing is like a have-not state or province. Drive through West Virginia and the gas taxes and price per gallon is huge. Cross the border into Virginia and they ain't. Harness racing - with a dwindling customer base has always done the California shuffle: Raise takeout to hopefully make money, because they felt they had to. Unfortunately, when you squeeze a lemon with no juice left in it, all you get is a sore wrist. So not unexpectedly, the result has not been pretty. Pompano, like most harness tracks, absolutely raked their customers out of existence and handles fell quicker than a Lindsay Lohan film check.

Late last year they made change one: The price, and it was not a minor change: WPS dropped from 20.5 to 19, Pick 4 from 25 to 15, all other bets dropped from 27.5 to 23, except supers from 29.5 to 25. So far the results look promising: They had a purse hike and handles are trending up. Last week they had their highest handle night in at least two years.

But price is only one part of this business and its success or failure. Pompano has also implemented several customer focused themes, have a nice track side show and have gotten involved in the community. And today they have announced another important phase. For those of you who have been critical of Equibase in thoroughbred racing, you will like this.

Effective immediately, the online resources available for the South Florida harness racing product will be offered to the fullest extent by The Isle Casino Racing Pompano Park. This includes the free availability of race program pages, live race night online audio and video streaming, and the archive of on-demand race video replays.

Doing that, three or four years ago, was a dirty word in our sport. Paying for replays, paying for programs (i.e. a restaurant asking a customer of $2.50 to read the menu) and locking up a signal behind a Department of Defense firewall was considered a common business practice. Not any longer.

Doing some fundamental things like this - adding to churn with lower take, offering out some common sense customer perks - is considered common for casino's, slot parlors, or your neighborhood Wal Mart, but in racing (some tracks are doing free replays now like Woodbine and Charles Town among others) they are not. But little tracks are showing the big ones that the time has come to join them. They won't fix all the problems we have, but they're a start. And when we see places like California doing the opposite, we should be thankful for them.
at December 28, 2010
Email ThisBlogThis!Share to TwitterShare to FacebookShare to Pinterest