Why I Support the California Thoroughbred Boycott 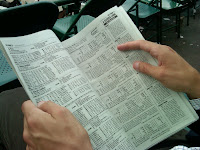 This week it was announced that there is a national boycott of California thoroughbred racing. As a good deal of you know, The California Horse Racing Board decided to raise takeout this past year, despite gambling experts, empirical data, most of the racing press, and horseplayers urging them not to.
The same board passed a takeout hike earlier in the year as a test case at Los Alamitos and on-track handle was off over 25%, with total handle off around 15%. Regardless, they pressed on and did it again.
California certainly is a dysfunctional state, in many ways. Their horse racing board, which makes wagering decisions, is mostly filled with horse owners, bureaucrats and political appointees. To many, this is a group that should not be making multi-million dollar gambling decisions - real gambling people should - while leaving horse decisions to them, yet they do.
As has been shown time and time again, raising purses through a takeout increase (or even through slots) does not help the long-term growth of your gambling business. Over time, your customer base always shrinks and we are left with less than we started with. In fact, the same group (the CHRB) did something similar in 2006, raising purses in the short term, and everything was supposed to be fine. It failed, and now they are back again doing the same thing. Unlike most businesses who correct mistakes after trying them and failing, California redoes them, hoping for a different result.
There are many people supporting this because they see a few more dollars waved in front of them, but in my opinion, they are focused on only one thing: Their pocketbook over the short term.
I know someone like Bob Baffert supports this hike in takeout, and he has said so. He will see a purse this spring of $20,000 for his horses that last year was $18,000. Who doesn’t like money? The problem is, ten years ago that $18,000 purse was $25,000. In ten years that purse will probably be less than $10,000.

Not long ago I saw a video of a California trainer say “we should take as much as we can when it’s there, because it won’t be around much longer.” It’s the way the business functions, and thinks (and not just in California; as a good friend likes to say “racing cannot look past its own nose”).

This takeout hike might have a pharma sales rep adding a few more dollars to his expense account for 2011, because people like John Sadler can put some of the purse increase into a new supplement. Awesome! But ten years ago the same pharma rep had ten stops on his horse route and drove a Lexus. In ten years he will have to move to Pennsylvania in his Impala.
It might help some others in the short term too. This takeout hike might get a groom tipped $20 more for a win because of a slight purse increase this spring. That’s wonderful. Who doesn’t like money? But ten years ago she got $50. Ten years from now she will be unemployed.
Why am I supporting the boycott? Because I want horse racing to have a good future; and takeout hikes, a lack of customer appreciation and a dysfunctional management system whereby horsemen make gambling decisions assures a bad future, not a good one.
If people like Keith Brackpool, or Bob Baffert, or a groom, or a Pfizer sales rep won’t stand up for racing’s long-term health, who the hell will?
I bet $1833 a day on California thoroughbred racing last season. This season I will bet zero.

And it appears not a soul in racing other than my fellow horseplayers care enough about our sport to do something about it.
at December 14, 2010
Email ThisBlogThis!Share to TwitterShare to FacebookShare to Pinterest

Too bad we can't get the input of the old time bookmakers -- those who made good livings taking action on racing and sporting events in the era when horseracing was cramming fans into what we now see as near-empty grandstands.

Takeout levels were as low as 10-12% (WPS) and many fans had the experience of going home a winner at the end of the day. Maybe not often enough to quit their day jobs but enough to come back soon and have at lesst an expectation of winning again.

Greedy track operators and legislators ( most of whom were never very intersted themselves in gambling in general for their own recreation ) didn't take into account that even the $2 bettor hoped he was going to have the thrill that comes with winning.

But when takeout elevated . the winning disappeared.

Wisely, those old time bookmakers wo took 11/10 action on football games 50-60 years ago never raised their takeout. And you know what? Every major newspaper in the country today posts betting lines for football and other sports action while ignoring horseracing for the most part. The sports bettor wins frequently and his aim is to play for gain. The horseplayer had that element taken away.

It all comes don to takeout. Ask the bookmakers -- who held down the temptation to increase the cost of betting so that people could afford to play.

The sad thing about this..... If Ontario harness tracks changed their take out to the new california takeout rate.... it would be a takeout decrease.

It comes down to the quality of the product. California does not have it and increasing their price to participate will not address that problem.

The only boycott that will work is a complete boycott of California races.

Let's decide to COMPLETELY ignore Calif racing until the Kentucky Derby of 2011.