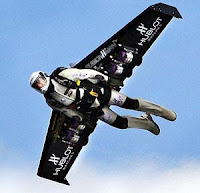 I was on the Jason Bourne for harness commissioner bandwagon since he is a super-duper ass kicker. But ever since Matt Damon started giving wacky interviews about dinosaurs, he is out.

My new choice for harness racing commissioner is FusionMan.

If a guy can jump out of a plane with a boomerang on his back and fly across the English Channel, he is a shoe-in to fix the whipping debate.

I have now thrown all my support behind this flying Swiss dude.

Speaking of the whipping debate, the drivers are speaking out. Jamieson and a few others met with the WEG judges yesterday. We'll try and find out what FusionMan thinks.
at September 26, 2008
Email ThisBlogThis!Share to TwitterShare to FacebookShare to Pinterest