Yesterday New York State issued a 209 page report, detailing various problems that have existed this year at the state's racetracks. The report was fairly scathing, with the state's racing and wagering board, NYRA, trainers, vets and medications all taking a big fat swat for not protecting the horse enough, and for failed planning.

As the DRF reports, horsemanship and the administation of drugs on backstretches are an issue that isn't going away.

In the DRF, Dave Grening interviewed some trainers and their responses were, well, you judge.

Trainer David Jacobson, with regard to a proposal that says trainers should keep records on how and when horses are injected, said

“My biggest concern is the massive amount of paper work,” Jacobson said. “Who’s going to do this, the vets?”

Trainer Todd Pletcher when told about the time added regarding the use of clenbuterol said, using it would be a "waste of time"

And, Rick Dutrow is not impressed:

“I don’t think backing up [the administration] of clenbuterol is going to stop horses from breaking down. “Whoever is thinking that, that’s how lost these people are in this game. That’s ridiculous."

There's something ridiculous in that alright: Rick Dutrow, who is appealing a 10 year suspension for breaking medication rules, is giving racing advice on medication rules.

Vet passports, keeping track of injections so that a new horse owner can see what vet work has been done (so he doesn't do vet work on top of vet work), is nothing new. It is not even close to ground-breaking . Europe does it, as does Ontario racing (since 2008). In fact, I know several trainers in Ontario that kept track of everything they give to a horse, whether it be supplements, herbs, vitamins, or vet work, before they were even mandated to. It helps them understand what works with their horse, what doesn't, and shows real horsemanship.

Heck, in Hong Kong your horse is in a holding barn 24 hours a day, 7 days a week where vets have to be checked in by the HKJC and every treatment has to be approved.

After the above story, Steve Crist weighed in on NYRA's role in the problems, titled "Even-handed Report Disappoints Chicken Littles". This title was formed, apparently in regard to the fact that NYRA was not single-handedly blamed in the report; like it is some sort of victory.  He goes on to praise the reports' findings, while letting NYRA critics know that they have not won the war, only some tangential battles. Of note, Mr. Crist might be considered, even on the surface, as having a conflict in any NYRA column. He was a part of the takeout story last year, where the NYRA CEO was eventually fired.

Ironically, the NY State report backed up a great deal of  the suppositions made this spring in the New York Times article by Walt Bogdanovich and Joe Drape; an article that Crist (and many others) assailed.

Whether it's our industry press trying to rally the base, protecting their friends and associates at organizations they carry water for, or our participants complaining they may have to do a little more paperwork before sticking a needle into an animal, it shows we've got a long way to go.

Racing is looking like the old skit in the movie  Monty Python and the Holy Grail. 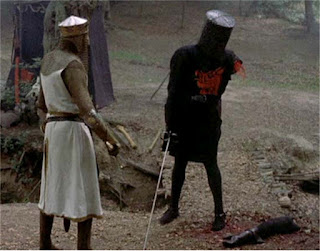 In the classic scene with the Black Knight protecting a bridge, things aren't quite what they seem to this protector. After meeting King Arthur and getting his arm chopped off, he replies "it is but a scratch". After getting his leg chopped off, he replies "tis is but a flesh wound". While hopping on one leg and trying to ram King Arthur with his chest he says "ok, let's call it a draw".

No matter what you read in some of the mainstream racing press, or hear from participants, what racing is going through is not a "draw". Racing is getting its ass kicked; in the press, in state houses, with the general public, with governments in Ontario who have left it to die on a vine. 2012 will go down in history as a game-changer in this sport, perhaps more-so than any other year in its long and storied history.

at September 29, 2012
Email ThisBlogThis!Share to TwitterShare to FacebookShare to Pinterest