We had some serious fun yesterday (in a satirical type way) with Philadelphia Park on twitter. Early in the day Dan (@thorotrends) was looking for the Parx twitter feed. He found one:


Granted it's not supported as well as @parxcasino @parxpokerroom and @360parx but a twitter feed for horse racing exists: @parxracing
— Dan Needham (@thorotrends) September 22, 2012


@pullthepocket @thorotrends I refresh with anticipation every 10 seconds hoping for more tweets
— Inside The Pylons (@InsideThePylons) September 22, 2012

The joke of course was that the feeds for the casino are very active, and have many followers (over 5,000). The twitter feed for the track has one tweet made on Mother's Day, and is about as dead as a new stimulus package for Solyndra. 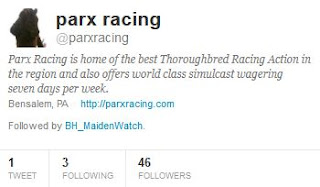 It got me thinking. what if the Cotillion purse wasn't bumped by $250k and they used that for their twitter feed?

The $250k could've been spent on employing a twitter feed operator for four hours per day, six days a week at $25 an hour, for over 8 years. Not bad!

They say things are funny because they're true. We often hear that racinos only care about casinos and neglect the racing. That was an interesting example of it, fair or not.One way or another, it provided some chatter between races yesterday on twitter.


I think both big stakes races at Philly might provide a lesson on why you have to not put too much stock in one race when judging whatever it is you may be judging about a horse's ability.

At times the track is just not suited to certain horses, or they might have even had a bad day. Sometimes the results (and how the races were run) just feel "funky".

The filly race was a real barnburner. Heavily favored Questing was defeated by last years superstar My Miss Aurelia in a big sprint to the wire. What made the race confusing was the fractions. They crawled, but one wonders if they really crawled or not. The track looked deep and (as is usual at Philly Park) the outside was better than the inside. There was definitely something funky going on with that surface, in my opinion.

Later on in the PA Derby, Handsome Mike went slow as well, and held on nicely (he too in the four or five path). Alpha, who came on along the inside, seemed to be of one speed. No one else really made a move. It was a bit of a head scratcher, regardless. Was Handsome Mike the best horse in the race, or the best horse on that day?

I've always thought Handsome Mike is a horse with ability. If you watch the Spiral Stakes again, take a look at him in action. He has some talent. I'm glad he finally won something, because he has deserved to, regardless.

Of note: If the track was deep and tiring (I'm still not sure it was, it seemed so odd), how good was Trinniberg? Those fractions were huge and a deep closer won, with him coming a really nice second.

At night there were a few sires stakes at Mohawk, along with the Milton.

We've surmised that Warrawee Needy getting torched early, and them having to be careful with him, might pay off. Later in the year a good deal of the early 3YO stars get chewed and they're ripe for the taking. Last night Needy stormed home in 54.2 and looked like his old self to win in 148.4. If that was a Beyer figure, it would've been a big one - perhaps better than Sweet Lou's 147.4 earlier this year. The track was at least a second and a half slower last night. It was cool and the track looked dead.

In the Milton the stout fractions on a dead track killed the front end, with bombs lighting up the ticket. Rocklamation is a fantastic horse, and I cannot believe she was let go at 23-1 (not a redboard, I said so on twitter).

In New York, the Sires Stakes Night of Champions tool place, but I barely watched. Half mile track racing is too formful, or post driven for me. It's just kind of blah.

Jennie Rees takes a look at the Illinois Derby, CDI story. There is something very unsettling in this episode. Churchill should re-look at this and do the right thing. In my opinion of course.


at September 23, 2012
Email ThisBlogThis!Share to TwitterShare to FacebookShare to Pinterest