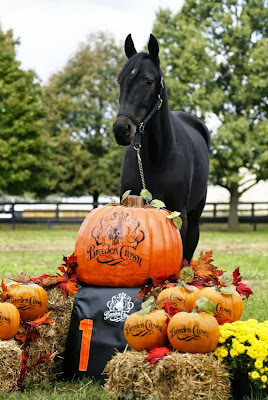 Tonight the Breeders Crown card starts at 5 sharp at Pocono Downs. There are some really nice horses competing this evening, and we should see the usual - the cream rise to the top - but there is a chance we might see some upsets, too.

In the first big event of the evening for two year old colts, the on paper champ, Father Patrick looks like a lock. However, I'll upset hunt in here. For a short priced favorite I like to be sure he will get a cakewalk trip, or is lights out open lengths better than his competition. Father Patrick probably is better than them all, but with a horse like Nuncio from the outside (possibly going crazy fractions again), uncertainty is added to the race. I will take a small poke on Credit Fashion, who might sneak a neat inside trip here.

In the two year old filly pace I am going to be betting She's Da Bomb. Fillies get sharp and stay sharp for awhile, but travel and a change of routine can mess them up. I think that's what happened to her last week, with that anemic performance. She is at least five lengths better than she showed, I think. I'll go back to her and hope she shakes it off.

In the two year old filly trot I see no board value, but that's okay, because sitting it out for my perceived value in the Open Trot is worthwhile. I have followed Intimidate for a long time and love the horse but I feel he will be, by far, the most overbet horse on the card. I believe he has things set up nicely for him this year, and if he is up against it in the least, he will be lucky to hit the board. I see board value on Wishing Stone, who is a little horse. Little trotters excel the smaller the track, and he should fire good here off a nice trip. At 12-1 I will play. I will also use Uncle Peter, who I think is handy enough to work out a trip.

In the three year old filly pace Iluvthenitelife is the Captaintreacherous of her sex. In fact, a sharp bettor mentioned to me that on a half mile track he'd like to see a match race between her and the Captain, because he thinks she'd beat him. I think he's onto something. Having said that she always looks on paper like a horse who can get beat. Betting against her has obviously backfired, but tonight there truly is a horse who looks sharper than she does - Shebestingin. I will also use Carol's Desire somewhere because if for some reason the drivers of the chalk turn it into a match race, funny things can happen.

In the two year old colt pace I have been toying with the thought of keying Luckbewithyou and I think I am sold on doing that. That horse was really good last week.

The Open older mare trotters has no board value, in my opinion. Maven and Check Me Out should be there somewhere. The three year old filly trot and open mare pace really don't interest me as a bettor. There looks like board value on Shelliscape but everyone and their brother are calling her for an upset. I do like her, but she looks like she'll be hammered at the windows.

The three year old colt pace provides a chance at a third upset of the evening. Captain has the rail and the hype. The others are chasing. I didn't think he was great last week, and two horses were marvelous: Sunshine Beach and Lucan Hanover. The former jumped a head number and it probably cost him, and the latter came home in 53.4. Conversely, the Captain was all out in 149.2 with a slow last half. Vegas Vacation threw in a total clunker, barely coming home in 55 and not even with a 27 last panel, off the best trip he's had since he was probably a maiden. Remember, this is a colt off cheap fractions who came home in 25.3 at Mohawk. I will use him to bounce back, possibly with a nice trip, Sunshine Beach on a possible speed mission, and Lucan Hanover. If the Captain was soft last week and is showing some wear and tear, it can make me some money. If he bounces back and goes 148, well it won't be the first time I've lost to him as a bettor this season.

Last up is a really, really cool race: The Open Pace. Not long ago the three year old pace was the feature, but no longer. The older horses are tough, fast and some of the best pacers we've seen in awhile. You can go 100 different directions in this race, but I think I will key on Clear Vision.

Best of luck everyone, enjoy your night, and good luck at the windows.

Thanks to the Breeders Cown for the picture, which I got off Garnet's full Crown card analysis at Horse Racing Nation. Garnet is a good handicapper so give it a read if you are playing.

Cautionary note: Remember, Pennsylvania has some of the worst takeout rates on the planet. Tonight the pick 4's provide you with the best rates. And there are pool guarantees.


at October 19, 2013
Email ThisBlogThis!Share to TwitterShare to FacebookShare to Pinterest