The news hit the wires today that TVG is in search of a new CEO.

This news assures a shake-up in programming at the huge ADW, especially when the upcoming breaking story is released that is sure to shake the foundations of horse racing: The new CEO of TVG is none other than yours truly, PTP.

How did I get the job without a degree from the Racetrack Industry Program? It's a question I have been asking myself since earlier today. For whatever reason, TVG went outside the box for this one.

Immediately I began to draft programming and technologically innovative plans. I will reprint the memo sent to my staff earlier today below.

I appreciate any and all feedback. And thanks in advance to all of you for your congratulations.

To: TVG staff, like Matt and the guy who looks like Ed Helms
Subject: Changes to TVG
From: CEO Pull the Pocket

I don't know many of your names because I usually watch HRTV, but I am stoked to be your new CEO. Woo!

My door will be open at all times, even to the little people who put the tanning bronze on Matt.

Everyone worries about layoffs when a new dude or dudette takes over but that won't happen. Why? Because we're gonna kick some horse racing ass. I have some new shows, camera angles and innovations planned. With them I'm sure we can crush Twinspires, then we'll crush Stronach, then we'll crush HRTV (that might be Stronach or Churchill or both, I never know, but rest assured they're on our crushing radar), and then we'll go after another network.  If there are no other networks, we'll try and crush something else like the DRF or HANA.

In the end there will be TVG, and others who want to be TVG. TVG is gonna be the grand poo bah, and others are going to be junior little wee tiny poo bahs. Or something.

Without further delay, here are my plans. Let's go get em team TVG!

1. TVGTV: I am going to create a new video interface where we can watch several tracks at the same time, and sell PP's and power ratings and other neat stuff. I've been thinking about this for a couple of years. I think it's a winner. Here is my idea in beta: 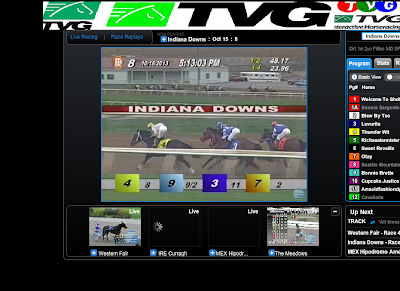 2. Gelding Cam:  What's up with these California trainers and regulators? Every time I watch a race some first time gelding wins and we have no freaking idea if they have the ol' family jewels or not. To cure this ill I immediately fit all horses with a small camera that will be placed between the legs to check for testicles, or no testicles. In the TVG studio Todd Schrupp will be scanning the video, comparing it to archival footage, and alerting horseplayers to which horses are, or are not, first time geldings. If Todd complains he has to look at cajones all day, screw 'em. I'm the boss.

3. New Show: "The First 112": You know that show on A&E where in the first 48 hours they solve a crime? This show will look at investigations by the Florida Racing Commission. It will follow, for example, a clenbuterol positive from testing, right through to the charging of the trainer, 112 months later. I think it will be riveting.

4. New Show: "Who Has Ray Paulick Pissed off This Week?":  Every Friday from 11 to 11:30 someone who Ray Paulick has pissed off will come on to confront him. It could be a trainer, some dude who loves lasix, or the guy who runs a small midwestern track. This could make for must see TV.

5. Contest: The Price is Wrong - Trying to capitalize on the current game show craze, a new contest is created. At one minute to post a lucky caller is chosen to guess what the final odds will be at the second call. If they are right, they get the jackpot and a signed Chris Scherf  t-shirt.

6. New Reality Show: "Dubai Dynasty" - This show follows Bob and Jill Baffert as they go about their day. Hilarity may ensue as they read emails by Andy Asaro, chat about Ray Paulick ..... and when Mark Verge shows up for dinner..... Food fight! I think this, with some luck, could become the highest rated non-scripted show on cable, and introduce horse racing to a whole new audience. This is a great example of the kind of outside the norm thinking I bring to TVG.

7. New Show: "Cell Phone" - This show follows a Louisiana trainer who gets caught with a class I positive. It chronicles his grueling 22 day suspension. It starts when he gets the bad news, to his taking the family on a trip to Tahiti where sits on the shore sipping Pina Colada's and trains via his cell phone. This may anger some horseplayers or regulators, but just wait for the episode where the guy falls asleep and gets a really bad sunburn that ruins one full day of his suspension. Payback!

8. New Feature: "You Make the Call" -  This new feature shows tape from a racetrack where, for example, herding takes place. Callers have to try and identify the track based on the stewards decision. Is it herding if it's at Penn National, Belmont or Santa Anita, or not? Prizes will be given and it's sure to be fun.

9. New Show: "CaliFire" - In one corner we have TOC head Mike Pegram. In the other, horseplayer pain in the ass Andy Asaro. For a half hour they discuss betting, takeout and handle. At the end of the episode the studio audience votes the winner. I know what you're saying, Pegram is in trouble. Well to even it out we allow him to pass out free 6 packs of McNuggets during commercial breaks. Let's face it, some people love McNuggets and it could sway the vote.

10. New Employee Incentive Program "The Race" - This new feature is sure to be a winner. Each time TVG does not show a race live, or pre-empts a harness race for a nw of $50 per start since the Clinton Administration $2,000 claimer at Los Alamitos, a TVG employee is docked $50 in pay. I toyed with the idea of having a trap door shoot the anchor out into the parking lot, but when I saw what you crazy people have to pay for workers comp in California, I nixed it.

at October 15, 2013
Email ThisBlogThis!Share to TwitterShare to FacebookShare to Pinterest

You gotta run "The Price is Wrong" by Jerry Bossert, he'll be glad to take a turn as guest co-host at Belmont.

You could also have your own version of "Wait,Wait Don't Tell Me!" where the Tampa Bay Downs fans try to guess who the "creative accounting" and allegedly doping trainer is sleeping with in administration to avoid investigation.

To me, CaliFire sounds a bit like The Debaters plus bribes. I'd watch! However you may think of following that lead-in with Caliurinification: where both horses and riders pee in a cup and a blindfolded panel of seasoned horse players tries to sniff out what disallowed substances they've ingested that day. Could really take off if filmed at Los Al!

And how about Milkshake Mondays? Here 4th tier trainers share their favorite recipes for "juicing up" their horses...Monday's usually a dark day anyway, could boost ratings!

I think you're really on to something.

Wishing you great luck with your new venture...Shake it up PTP!

A few more shows for TVGTV.

Screwed or not Screwed - This program will decide if horseplayers are screwed when a driver change is announced the first time at 1 minute to post time (that is usually The Red Mile).

The Handicapper Talent Show - When someone has the opportunity to perform their talent routine at 0 minutes to post time. The only rule is the routine must be over by the time the race actually goes off. At the end of the day, the judges vote for the best routine. I can't wait to see someone come out dressed like Carmine Miranda.

Juiced or Not Juiced - This is a view participation show. If a horse that finished 5th the week before moves up in class and wins in a new lifetime mark, the fans get to vote whether the horse is juiced or not. Of course, may take a year or two to see if the audience was right or wrong, but it allows them to vent their frustration.

Very very stupid. How about some serious changes to TVG

How about a sense of humor, Anonymous. Or, should I say, "Todd Schrupp?"

1) Can't use. John Burn surreptitiously copyrighted "TVGTV" after he got wind that we were greasing his career skids.

Also, we are contractually obligated to use him as a "consultant" for the next 12 months. Put him in the food fights (#6).

If we force viewers to look at Matt Carruthers, Schrupp can't complain that he's being forced to watch Gelding Cam. The experience is identical for both viewing parties.

3) " 112" cannot be aired. Racing investigations NEVER end. The program will end up colliding with our only profitable programming, the 4 a.m. infocommercials.

4) The "Who Has Ray Pissed Off" show will be moderated by Rich Dutrow Jr., who, currently ranked as the 996th trainer in the nation, seems to have plenty of time on his hands.

Ray, by the way, is irate that you didn't work Jane Crybabybelli (Tampa Bay Downs) into the program idea:

"I write 15 articles & personally harassed the Florida asshats until they FINALLY couldn't sweep her under the racing amnesia rugs anymore & HAVE to suspend her & you can't even work her into this threadbare comedy routine?!"

Brad - visiting his old haunts & flaunting the pay stubs from his advertising job, "Hurray! I don't have to apply for Obamacare!" - overheard this rampage (he was in the 7-11 three blocks away) & is impolitely chortling.

5) We're NOT made out of T-Shirts. If the odds DON'T change during the race, we get the T-Shirts back from the contestants. After the Wet T-Shirt contests.

Baffert wins & then discovers that Jill has been replaced by Grandma Yetta or Jane Cibelli (he gets to choose).

7) Cancelled. In Louisiana, no trainer is ever suspended for longer than 15 minutes.

8) Durkin likes this idea. Thinks it has something to do with hernias.

9) People laboring to be funny remind us of Don Reed. Yuck!

10) We first have to pay employees before we can dock them.

clear the screen of the BLACK box odds so horses can be seen, maybe a transparent odds /payoff table instead. post fractional and finish times and leave at top of screen or somewhere during race runnings. in warm-ups and paddock shots give all contestants a moment of fame, especially during gate loading show all of the horses so we can see what their body language is expressing.

How about a panel of racing fans who vote after every Hawthorne and Arlington race as to whether the times are correct or there was a timer malfunction. It must be a challenge because the powers-that-be at those tracks don't seem to realize their timers malfunction frequently, and/or don't want to admit it and correct the situation.

Do the Mcnuggetts come with a choice of dipping sauce?

How about the Los Al 300. since every race seems tobe only 300yds. the racing sec. was told he wont get paid if he writes anything else.

Thank You...I've had more than my fill of the "dirty deeds done real cheap" at Los Al! -azeri1