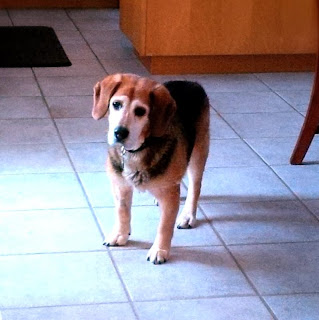 Over the past three years, many of you - both here and on twitter - got to know my handicapping partner, Ted the dog. It is with a heavy heart that after a tough month or so, I let you know that Ted is no longer with us.

I contemplated writing anything about this, but decided I should; maybe because I think it will make me feel better, but I think it’s more than that. So many of you have helped me over the last year by offering advice on things like care and meds, and we shared a general good cheer about our pets – whether it was a horse or a dog or a cat. I should let you know because you have all been so nice to me.

Back in the summer of 2010, we began helping out a local dog rescue by fostering. After seeing a nice dog get placed with a new family that we helped, it was rewarding. In late August I noticed a beagle mix with a sweet face on an animal shelter website. I called the shelter to see if anyone inquired about him and they said he had gotten few visits, but he was older, banged up, and needed special care, so she doubted he would get adopted very fast.  That was true, because five weeks later I flew into Halifax (where I split time), and away we went to meet him.

He was old and he was banged up. He had, we found out later, a broken pelvis – probably from getting hit by a car – that was never treated. That long-ago break caused a chain reaction. Through overcompensation from the pelvic pain, he walked differently and that caused a ligament in his knee to blow. That ligament then caused him to overcompensate on his shoulder, which had arthritis. To make things worse he had a terrible kennel cough that was exacerbated by the fact he was just neutered. 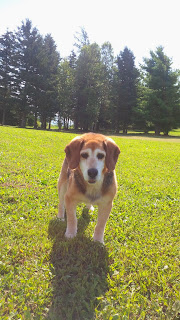 Sounds horrible eh? I guess it was, but the first time he entered the adoption room, you’d never have known it. He was as happy as a dog can be. Curious, friendly, like he had the world by the tail. We immediately liked him. And we took him home.

Slowly but surely he got better mentally as well as physically. I remember watching the Breeders Cup in 2010 which occurred four weeks after we got him. When Zenyatta rolled down the stretch I let out a “c’mon big girl” yell. He immediately cowered into the corner. By the following summer he had no such qualms when someone let out a yell. The couch, which early on to him was the height of ten Empire State Buildings, was now something (with some help) he could conquer. His coat got healthy and shiny, his fears were dissipating. He really came along. 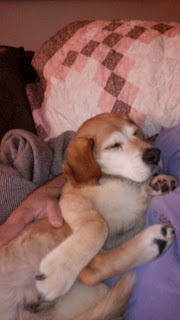 Lately of course, he slowed, like we knew he would. He just can’t have that many issues without them coming back to bite him. His shoulder gave him more trouble, his back end was really starting to hurt. We tried almost everything we could, and last week he had a tremendously good week, but there were more bad days than good.

On October 2nd 2010 we drove up to our little place on the north shore of Nova Scotia with a dog we named Teddy. Three years and 23 days later we felt that it was best if he died here as well. Our small town vet came out to the shore, and on his blanket at 4:05 Friday afternoon he left us.

I’d like to look back and say we have tremendous memories, or he is better off now, or that we did all we could to give him a better life. I will do that sometime I’m sure, but right now all I am is sad. This old dog who came into my life, who I spent virtually every minute with, who never asked for anything from anyone, who had a kind heart and good soul, who did not deserve to leave us so quickly, is gone.

I loved him and I will miss him. He was my best friend.